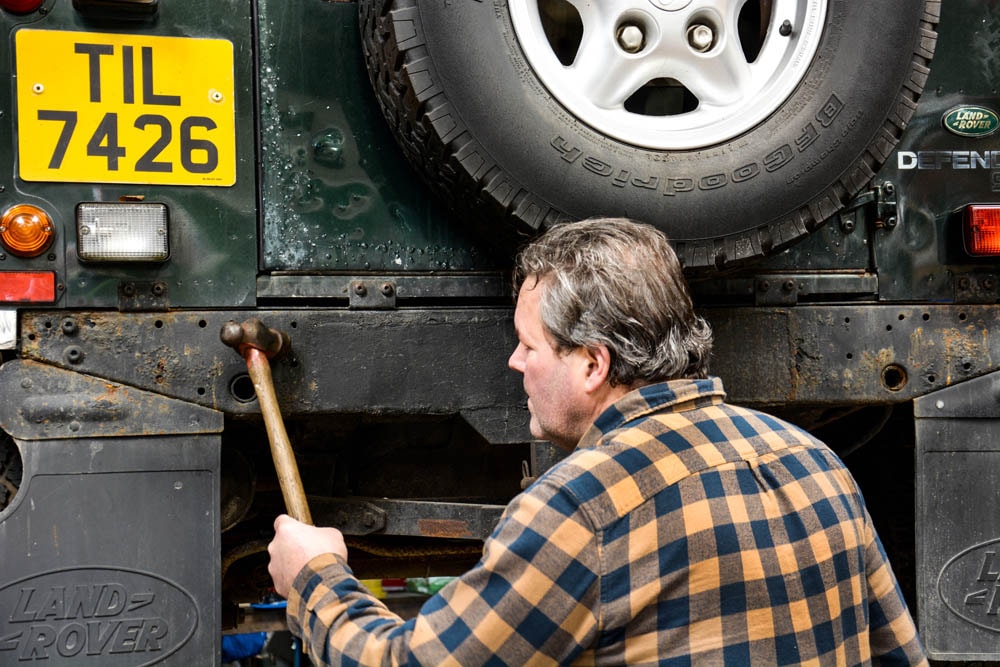 Thinking of buying a Land Rover, or spending money on the one you have? Trevor shows why a careful assessment is the crucial first step

During the pandemic, motor vehicles in Northern Ireland that have a current MoT in force are being issued with automatic extensions to their MoT expiry date. Initially a six month extension was added, and now a second six month extension has occurred in some cases. This means that a motor vehicle being offered for sale with a valid MoT in place, may not have been officially safety inspected or tested for more than 18 months.

The Land Rover Defender 90, which is the subject of this short series, is just such a vehicle. It possesses a current MoT, yet it has been off the road due to various issues for quite some time. While the Land Rover is definitely not for sale, and was booked
in to my workshop by the owner for a new chassis from the outset, it is worth a
thorough inspection to show what potentially could be on the market for sale in this
current environment.

So here I will show why this Td5 Defender might need to have a new chassis fitted, and also what to look out for when buying a vehicle in these uncertain times, or even assessing the vehicle you already own prior to major work being done.

Assessing the bodywork and interior

For most owners, or potential owners, this is the easiest part of assessing a Land Rover and making the relevant decisions. The condition of the body panels in terms of corrosion or physical damage is assessed simply by a visual inspection. Likewise the interior is assessed by eye and, to a certain extent, by smell, too. For example, the rear floor of this Defender was found to be quite damp, but I could detect this by smell before I actually touched the carpet.

With an unknown vehicle, it is important to look out for signs that an issue is being hidden. Why does that area have fresh paint? Why is something looking much cleaner than everything else generally? Why is the chassis covered in a thick layer of underbody sealant? 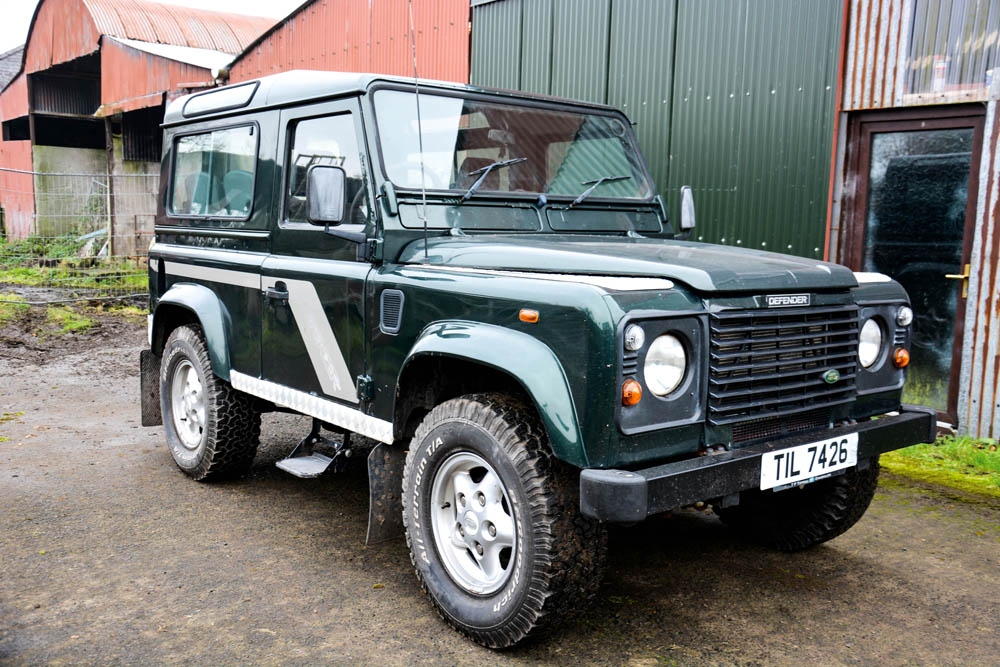 1. Fine-looking truck: From the front, the Land Rover looks to be in very good condition for its age, with no obvious dents or scratches in the body panels. 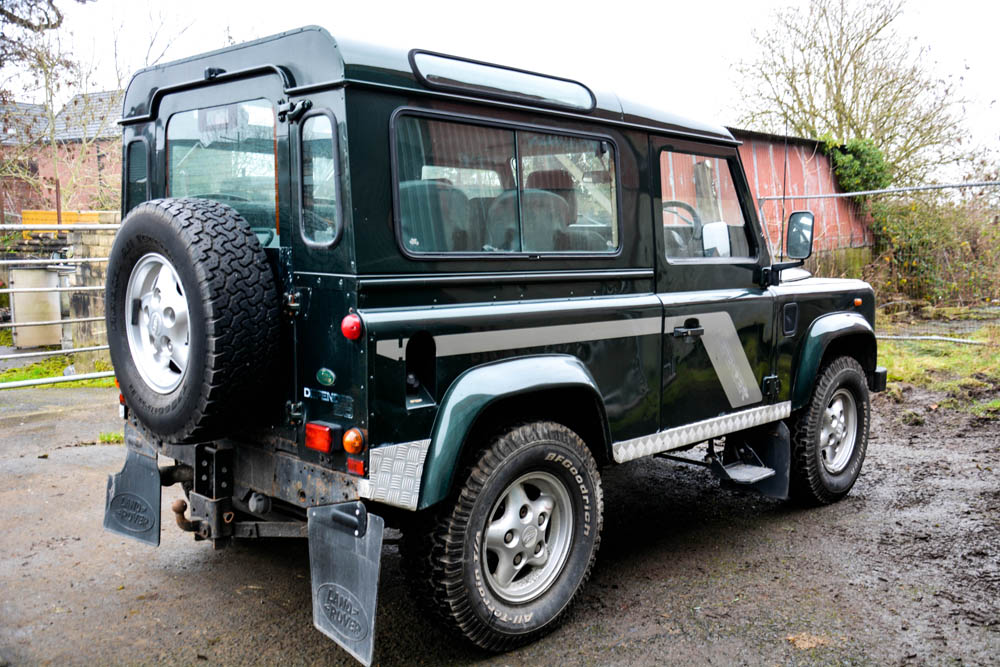 2. Cared for: The rear and side views also show that the vehicle has been well looked after throughout the 20-year lifespan, although the Safari door has corrosion. 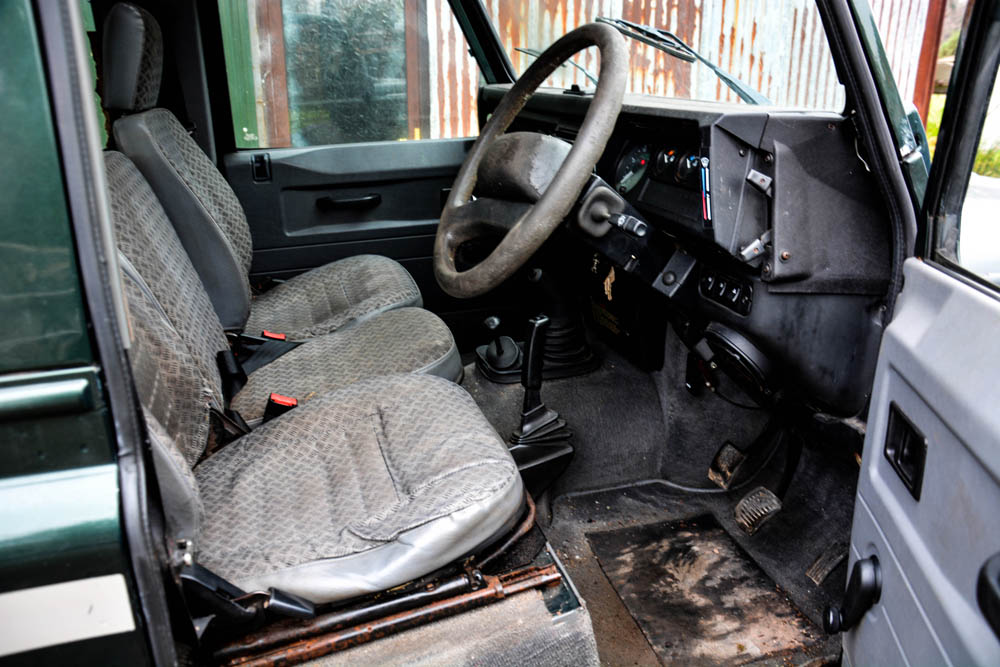 3. All can be sorted: The interior has not been badly abused, although aspects are very tired, such as these front seats which would certainly benefit from a retrim. 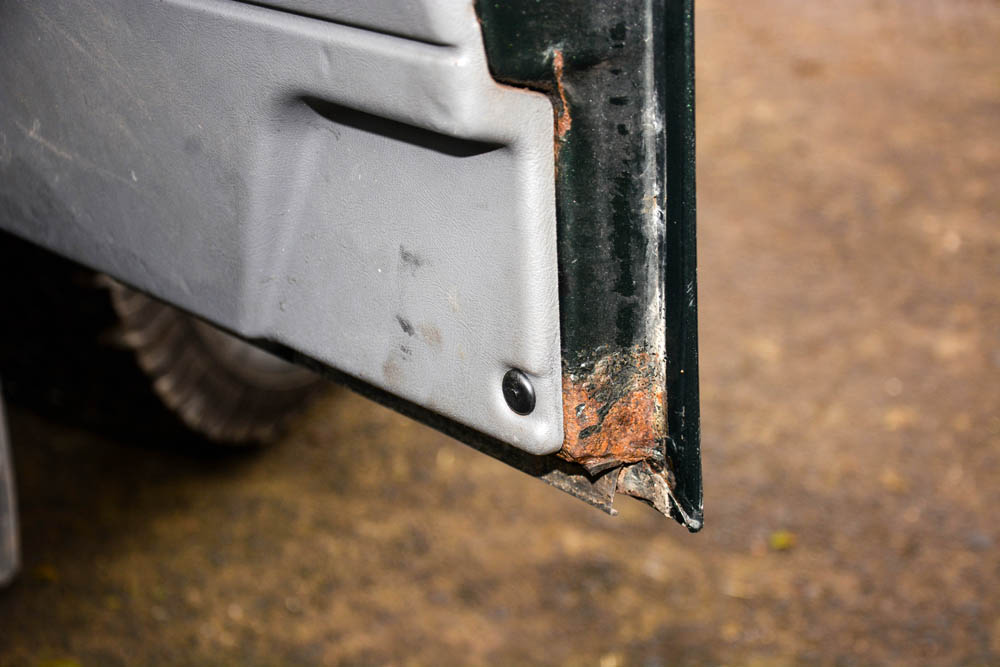 4. No surprise: As well as the corrosion noted on the safari door, the front doors are showing typical rusting along the bottom section of the frame. 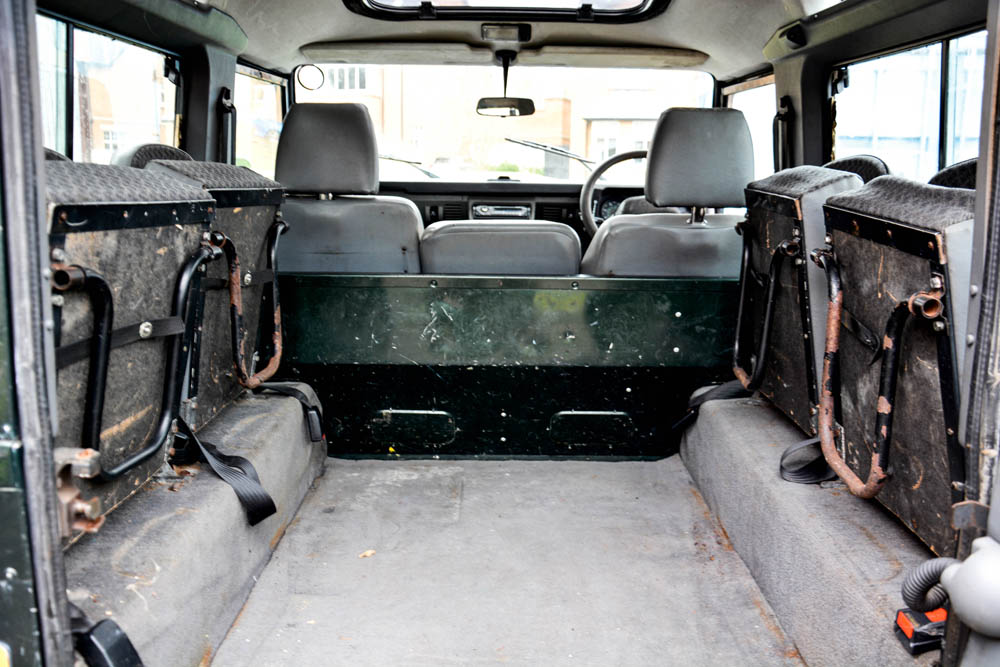 5. Water ingress: The station wagon’s rear seats are all intact, serviceable and not in bad condition, although the carpet is quite damp and musty in large areas. 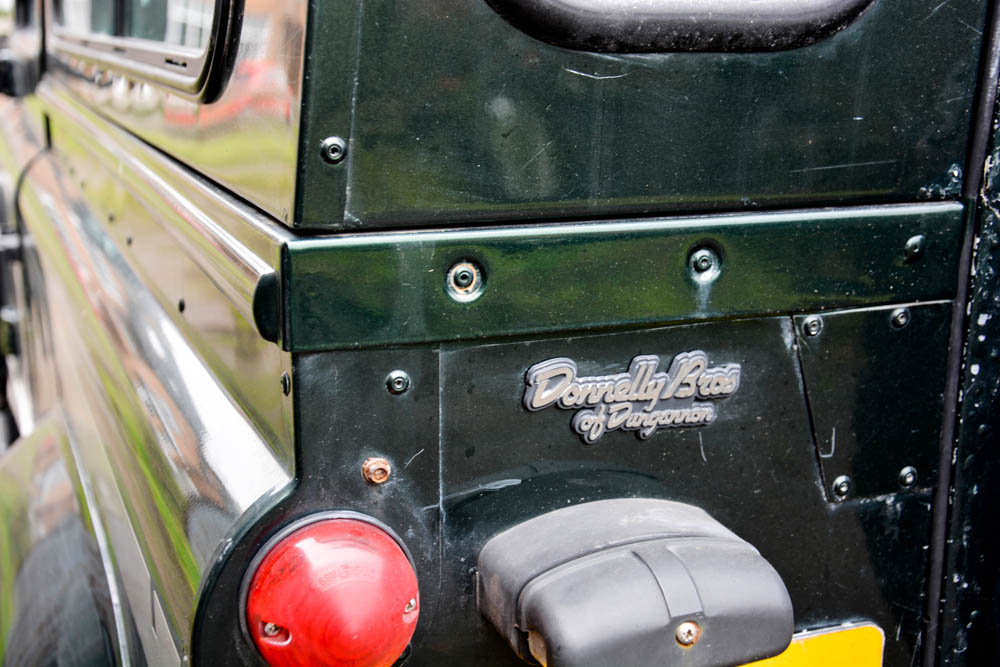 6. No costly replacement: Crucially, the rear body tub cappings are in excellent condition, showing no signs of rust along their length. One less job to worry about! 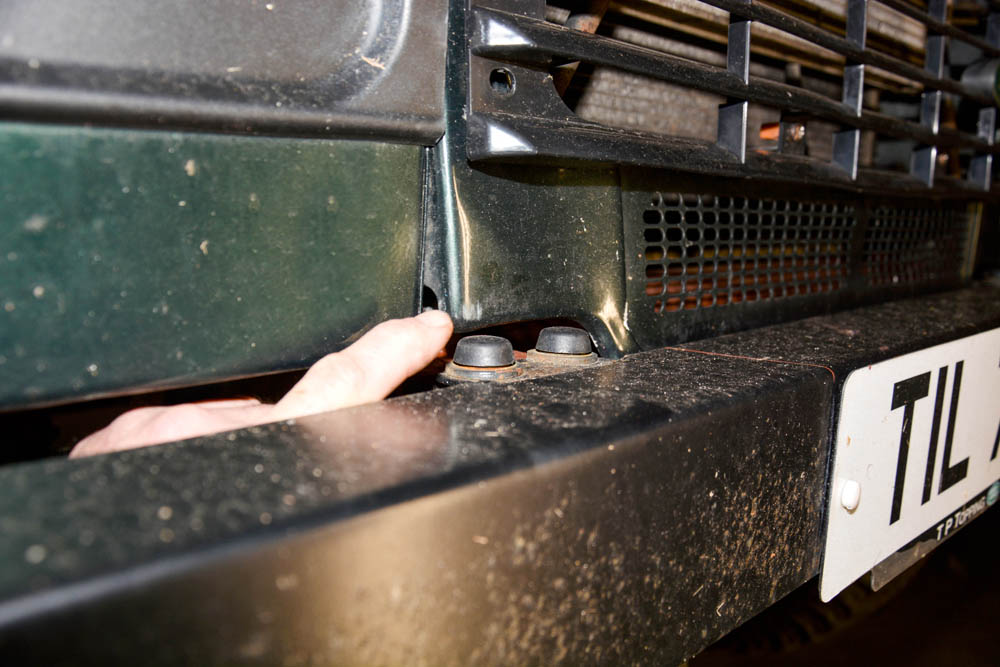 7. A simple fix: The radiator surround panel has a strange bend at the bottom area and looks like it was perhaps not re-fitted correctly at some stage. 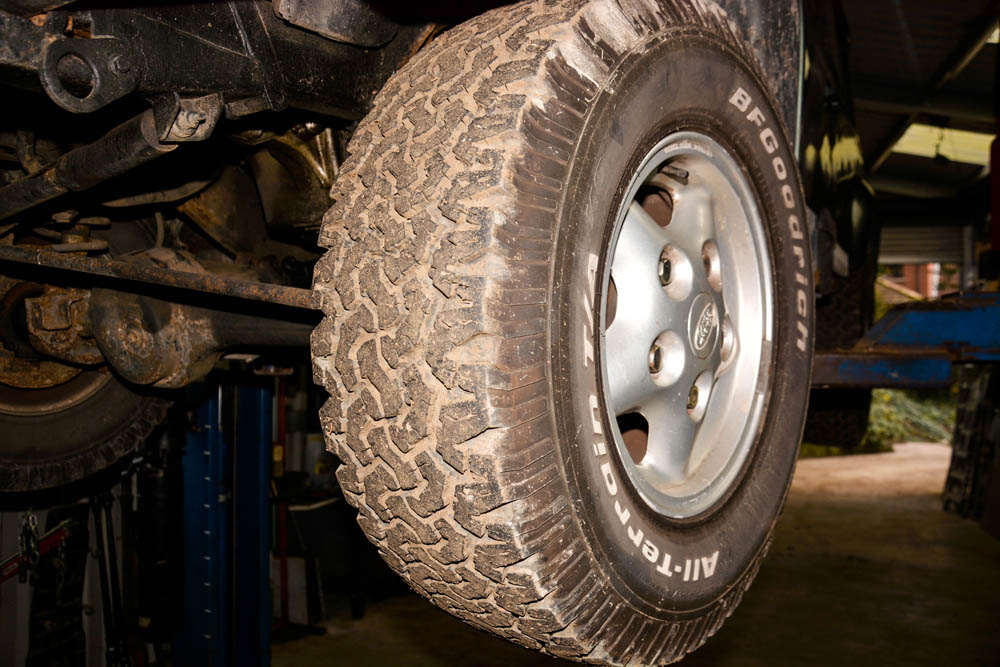 8. Good boots: The tyres are of high quality and have lots of life left in them, while the alloy wheels are not showing the usual signs of unsightly corrosion.

The easiest way to inspect a Land Rover chassis is to get underneath it with the vehicle raised on a lift. However, there is much that can be learned on your hands and knees with a flashlight, plus a hammer so you can hear the sound of the metal when tapped, and a poking device to prod areas that look suspect. Engage gear and handbrake with the vehicle on firm, level ground before going underneath.

Fitting a new replacement chassis is very commonplace these days, but it is still a costly pursuit so it is very important to examine the chassis properly. This applies to your own vehicle or one that you are considering buying. 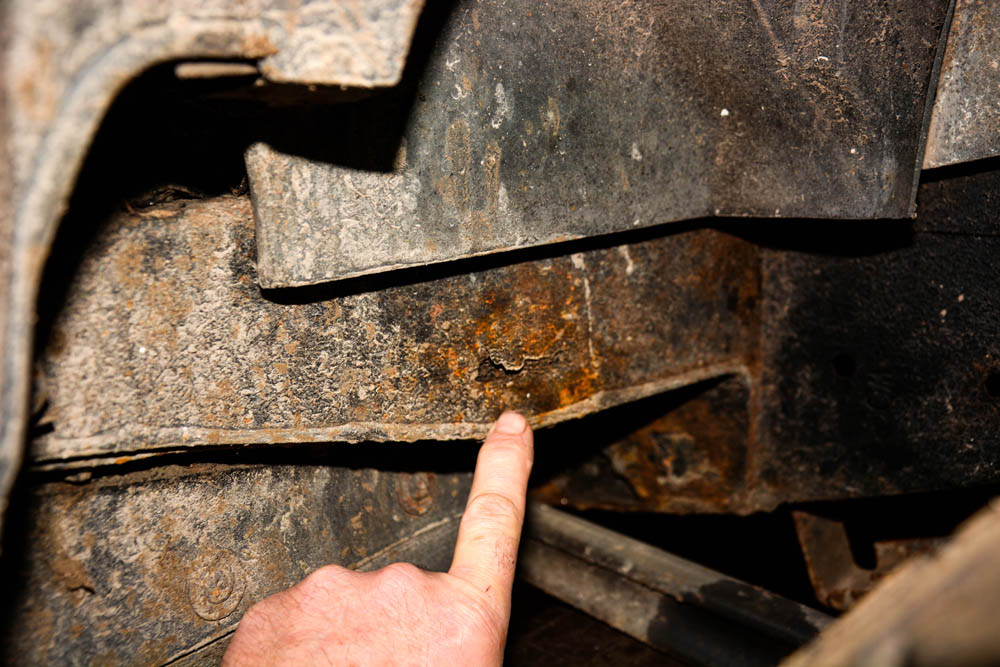 9. Sign of things to come: The bulkhead outriggers both have rust that has penetrated right through the steel structure. This is repairable, if it is the only issue with the chassis. 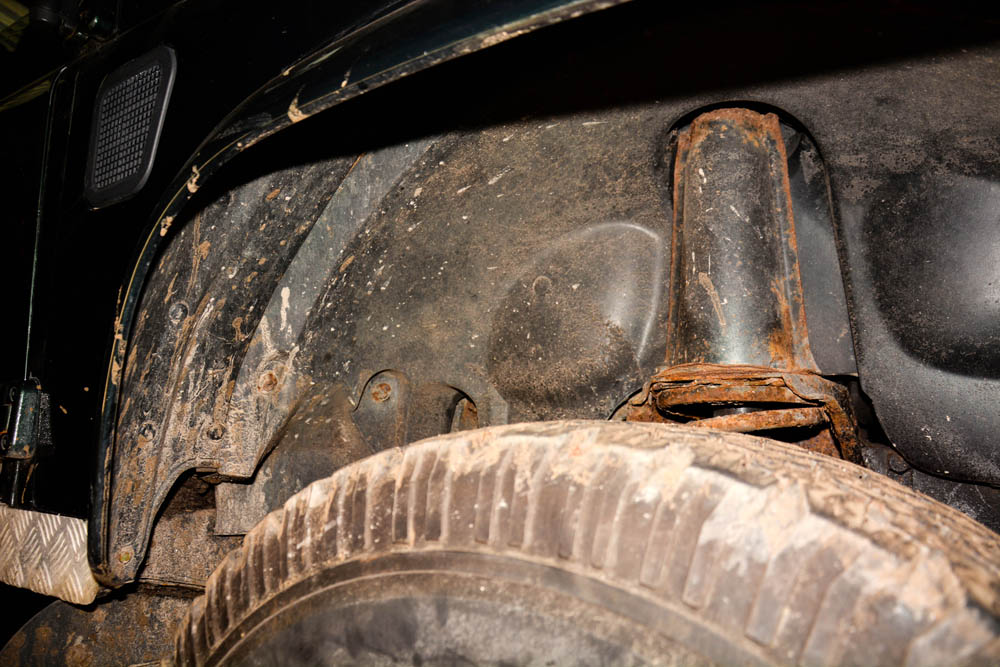 10. Extra protection: Station wagon models have this additional rubber wheel arch fitted each side for sound deadening, but they also provide protection for the footwells. 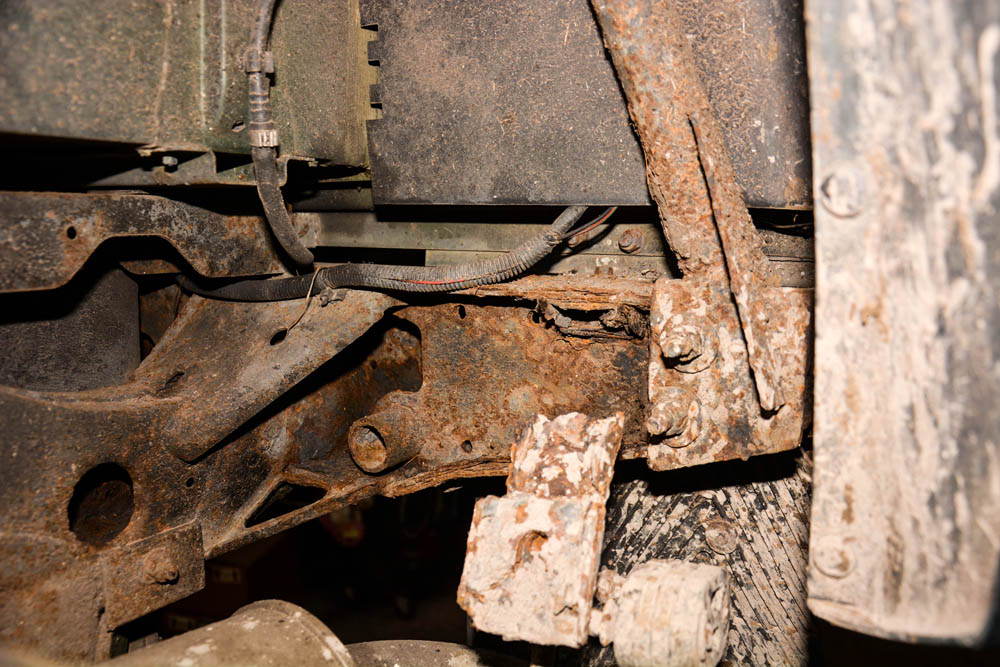 11. It lasted well: On the inside of the rear crossmember, rust has really taken hold. The crossmember appears to be the original item and not a replacement. 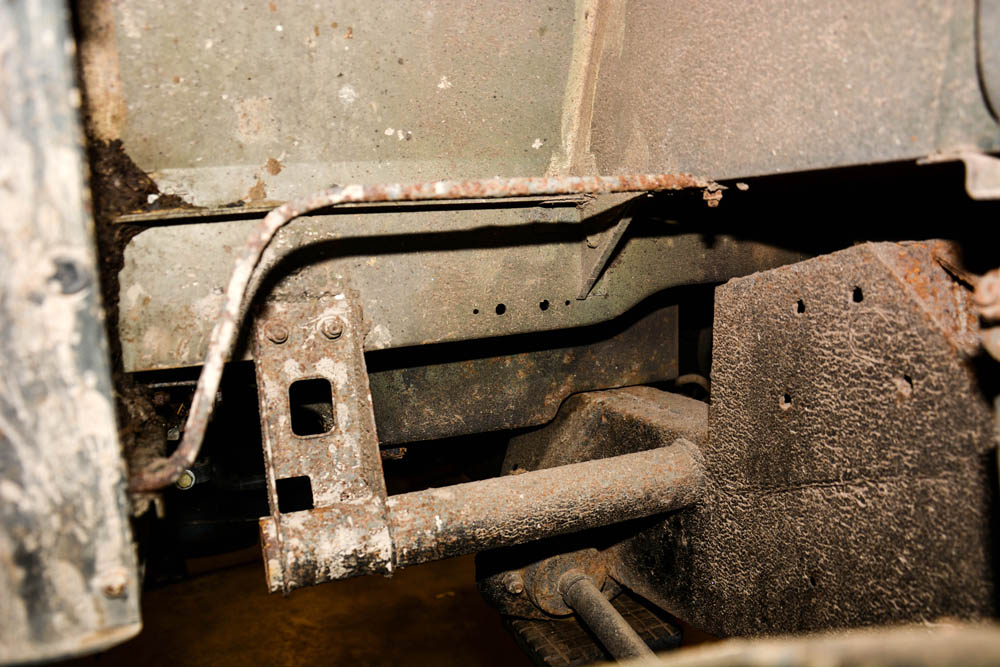 12. Positive signs: The tubular outriggers on both sides are in excellent condition and there is no significant corrosion where they attach to the body. 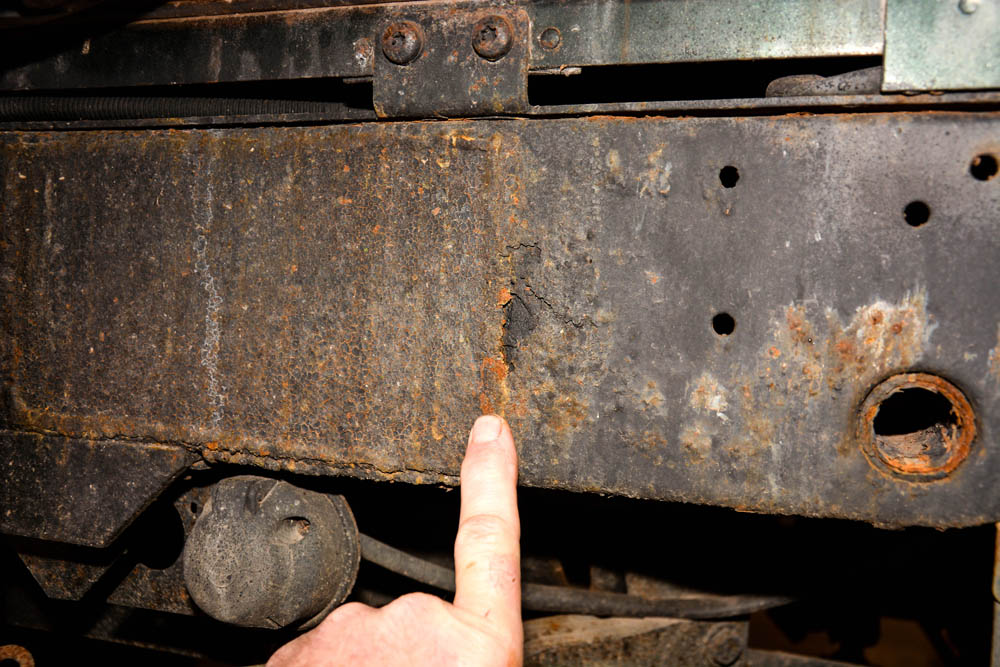 13. Chasing rust: The outside of the rear crossmember has lots of rust across the width and, despite having been repaired, there are new holes appearing. 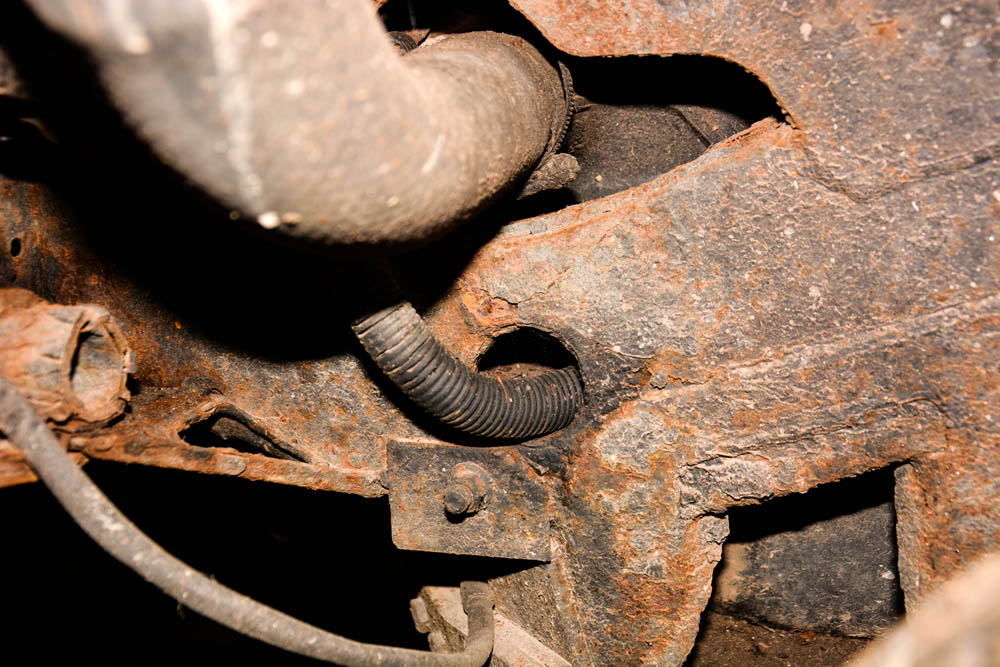 14. Multiple issues: The insulation from around the chassis wiring loom is missing in crucial places and needs repairs. Rust has taken hold where the loom emerges from the chassis rail. 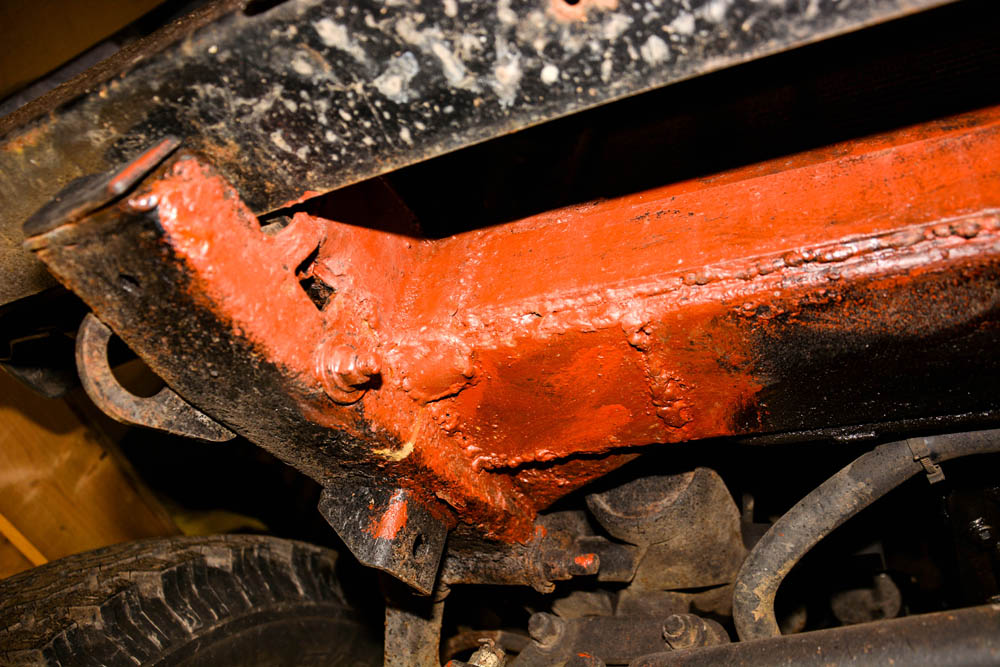 15. Patchwork: The front crossmember and dumb irons have seen extensive repairs over the years but are still not really in great shape, despite the efforts. 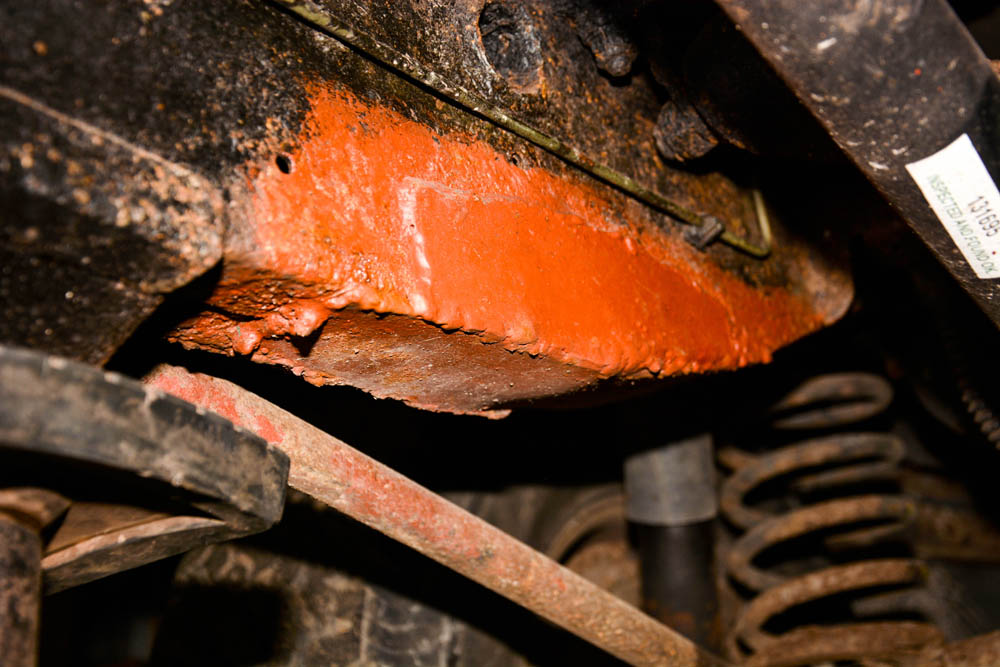 16. Flogging a dead horse: The lower section of the chassis rails have had multiple patches to repair rust damage along their length and are really at the end of their repairable life. 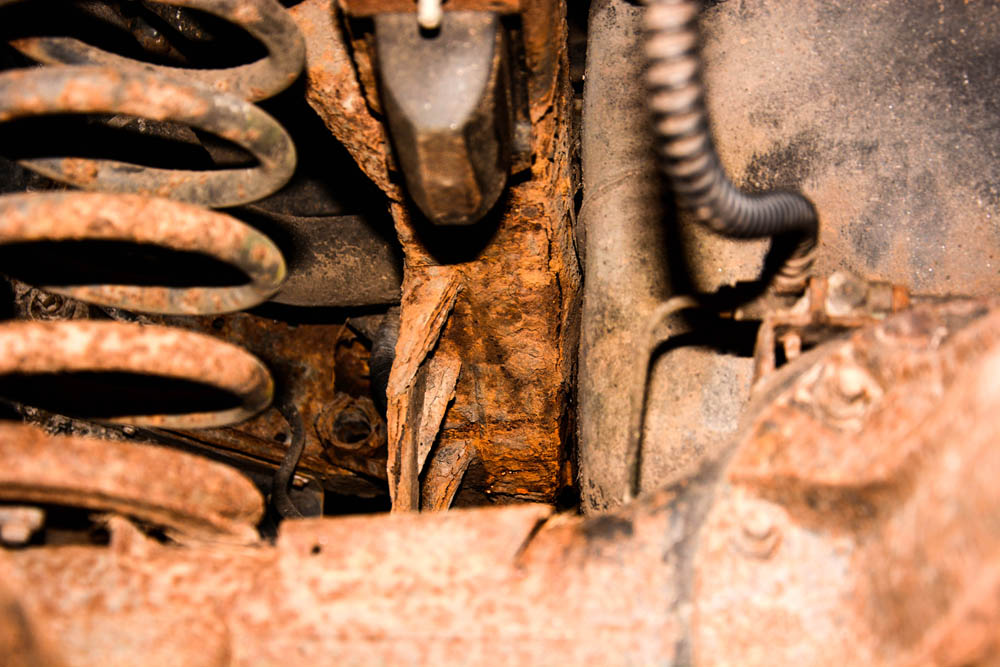 17. Untouched but terminal: The chassis rails on either side of the rear-mounted fuel tank have not been repaired and show the true condition of the chassis, which is dreadful.

Careful assessment of the drivetrain including the engine, gearbox, transfer box, propeller shafts, differentials and axles, is very important. Here we are looking for oil leaks, excessive play in moving components and the general appearance and condition of the ancillary assemblies. The test drive will also give us vital insight to the condition of the Land Rover, the service history and the likelihood of imminent potential failures.

The front and rear suspension systems are also areas to be closely inspected. The condition of the coil springs is checked for excessive rust, and any fractures or breaks in the steel. Does the Land Rover sit level when viewed from the front and the rear? Check the shock absorbers (dampers) for oil leakage and excessive rust, and examine all of the rubber bushes for damage and degradation. While suspension components are not the most costly parts of the vehicle to replace, they do have a dramatic effect on the handling, comfort and safety of the drive. And costs do have a dreadful habit of adding up. 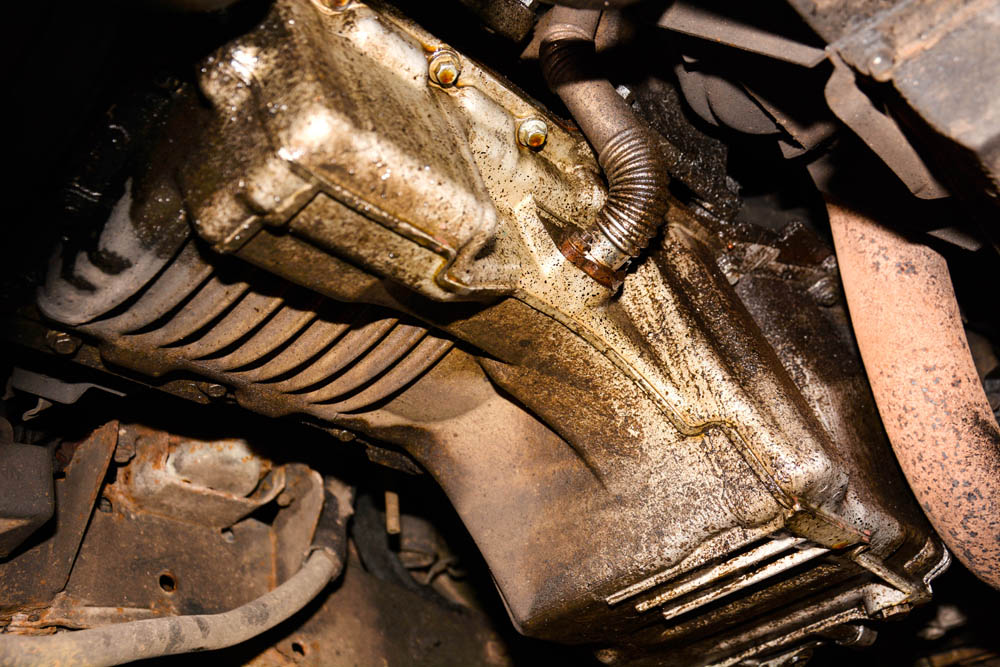 18. Not too bad: There is some oil around the bottom of the Td5 engine, but it is not leaking excessively. However, it would be good to trace the source and fix it. 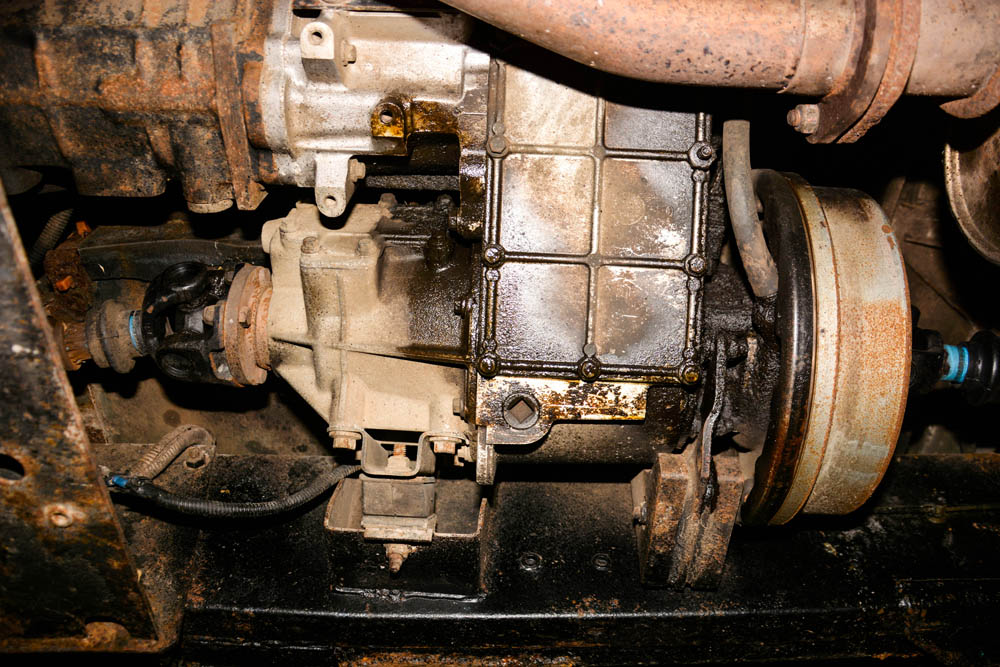 19. No big problems: The main gearbox is clear of oil while the transfer gearbox has traces of an oil leak, but again, this is not excessive. 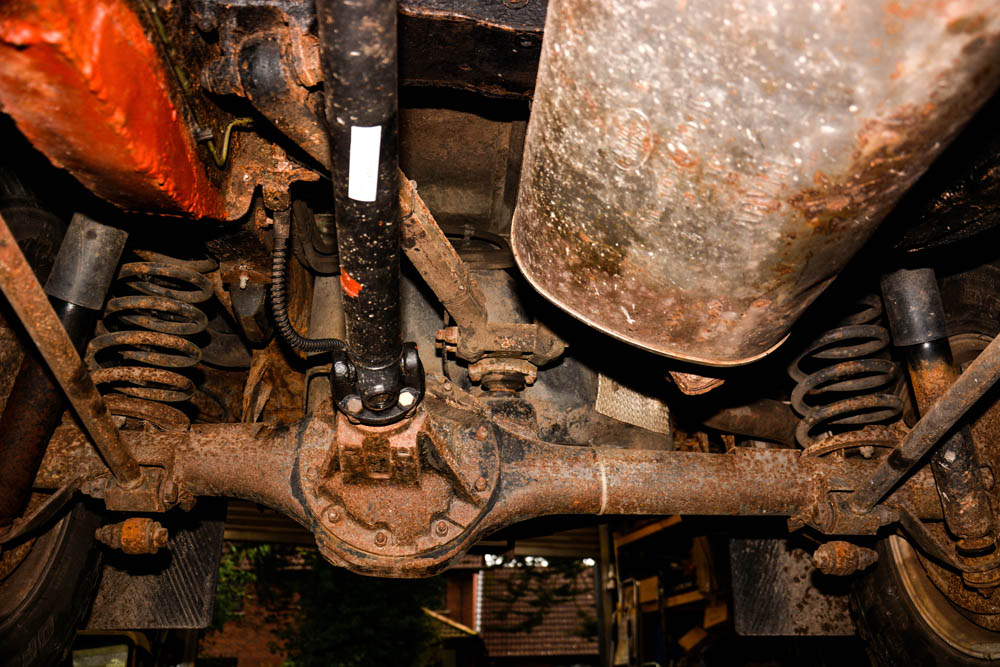 20. A pump of the grease gun:  The propeller shafts appear to have been replaced with new ones relatively recently, and are in very good condition. They would benefit from some fresh lubrication. 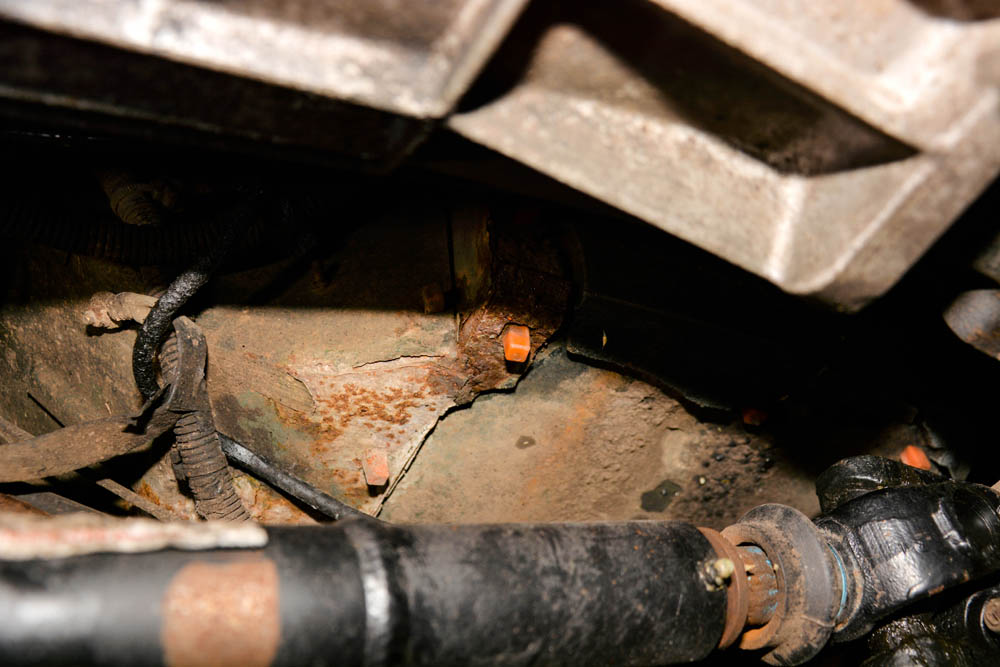 21. Common problem: The diaphragm that connects the transmission tunnel to the bulkhead is prone to rust at the two bottom corners, and this one is no exception. 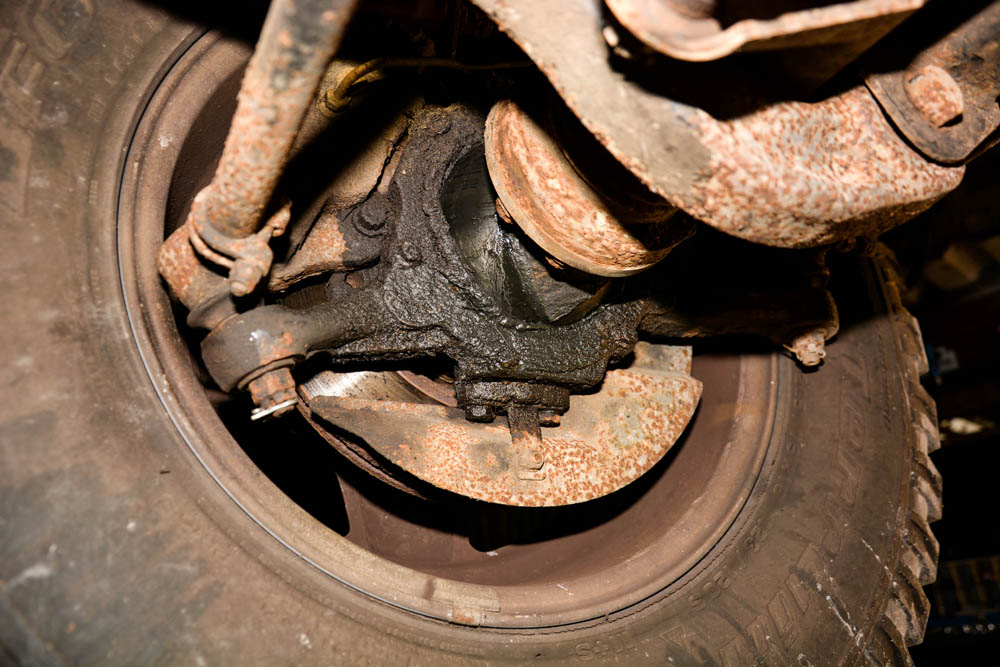 22. Need attention soon: The swivel seals seem to be letting the grease weep through; not excessively but enough to cause active drips from the bottom of the assembly. 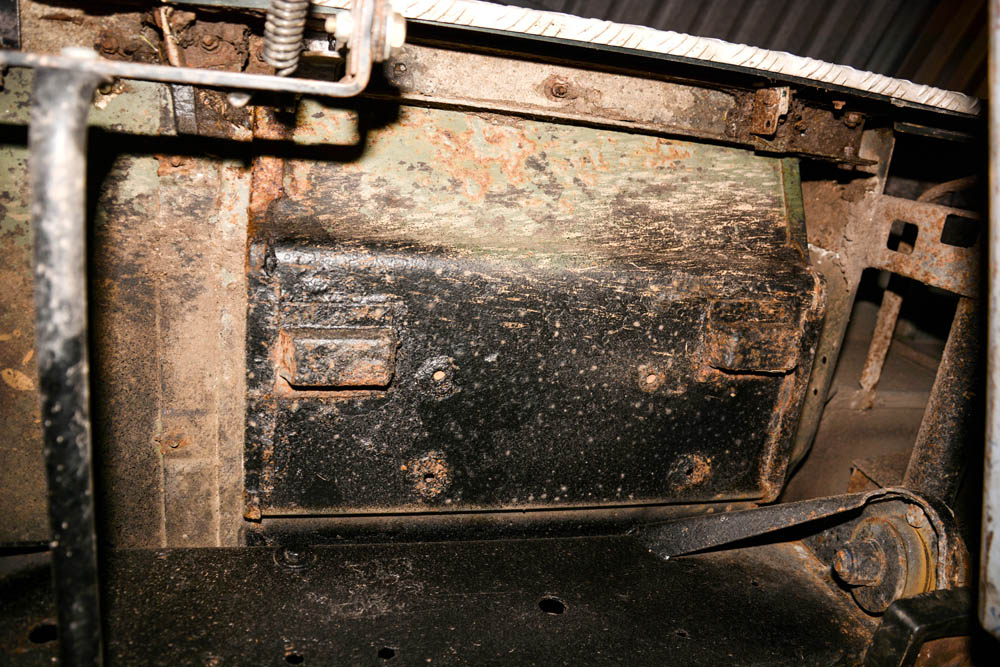 23. Under-seat compartments: The battery compartment is still sound and strong with only surface rust present. This could be cleaned up and protected with a fresh coating of paint. 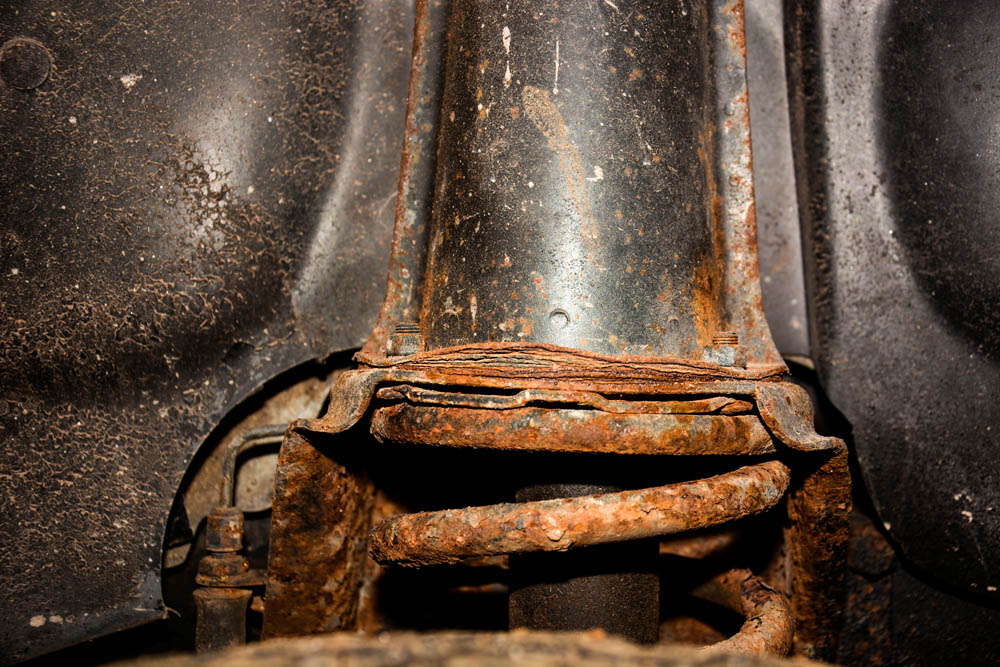 24. Galvanised replacements? The front suspension turrets appear to be strong but the lower lip is blown with rust on both sides and should be replaced, as they are not expensive. 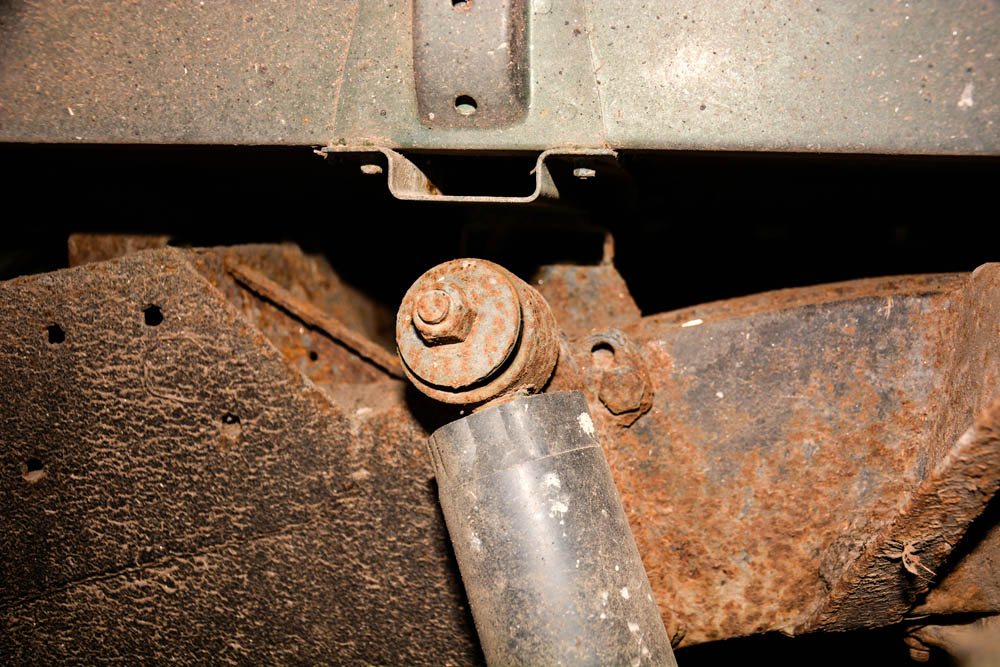 25. Perished rubber: All of the shock absorber bushes, that are visible, are loose in their mounts due to wear and degradation and the ones inside the turrets are probably the same. 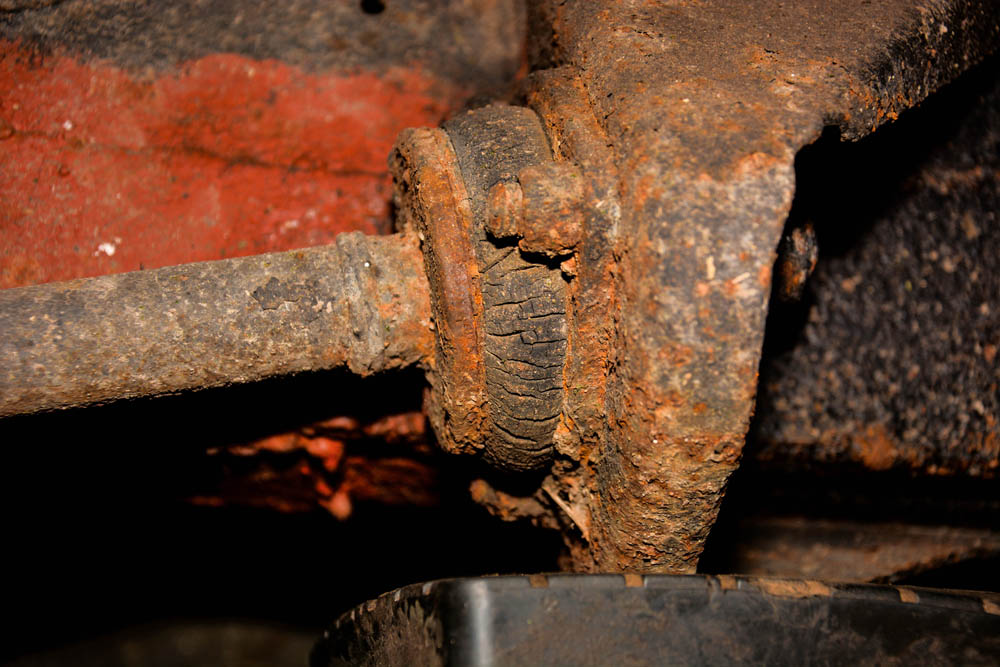 26. Seen better days: The trailing arm (rear) chassis bushes are in very rough shape – the rubber has perished badly and rust is advanced around the support washers. 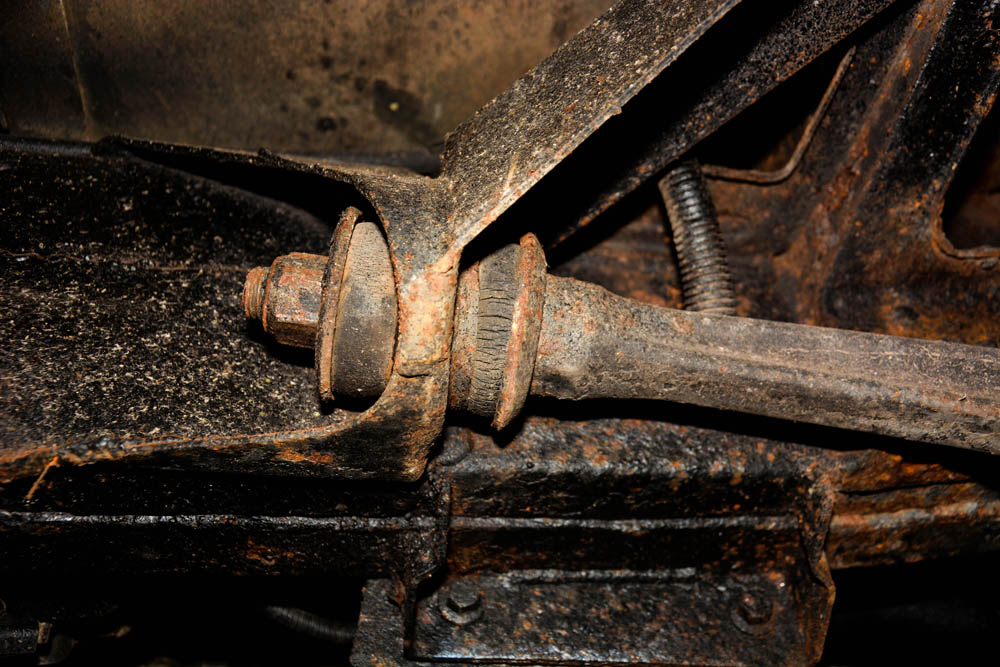 27. Original equipment: The radius arm (front) chassis bushes are also crazed and perished due to age – they are possibly the original bushes fitted at the factory.

Despite this vehicle looking very smart on top, we’ve seen that there is potentially a lot of work to be done. In this case, where the owner has decided to have the chassis replaced, it makes sense to carry out other repairs while the vehicle is dismantled and access is good, so all this needs to be factored in when assessing the time and costs involved.