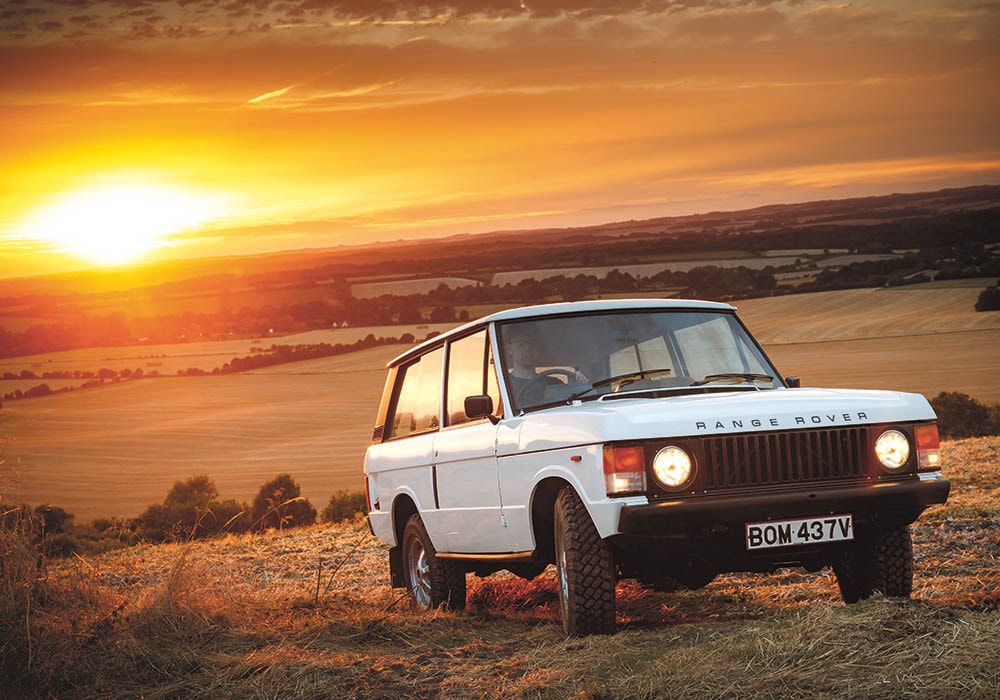 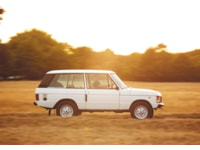 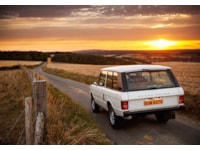 When Jaguar Land Rover Classic embarked on their Range Rover Reborn programme, they needed an all-original model for reference – and amazingly one existed

In the classic car world, there are four words that are guaranteed to raise the pulse of even the most hardened enthusiast: ‘low mileage timewarp condition’. Describing unmolested, totally original vehicles that have somehow remained hidden away and unused for decades, these rare finds are the holy grail for car collectors. They’re rare vehicles that – when revealed – look like they could have been driven out of the factory yesterday.

As you’d expect, such vehicles are few and far between, but every now and again they do emerge from the shadows and enter the spotlight. BOM 437V is one such example – a remarkable Suffix G Range Rover from 1979 that first came into public view in May 2015 when it was part of the Bonhams Goodwood Festival of Speed auction.

Before the auction, BOM had led a quiet life. Its first owner lived in Greece and used the vehicle sparingly on his occasional visits to the UK. Then, in 1982, just three years into his ownership, the vehicle was placed into dry storage where it stayed, seemingly forgotten, for the next 31 years – until 2013, when it was purchased by an anonymous second owner.

The tenure of this owner was brief, but money was spent having the vehicle recommissioned for resale, mainly replacing brake lines, rubber hoses and other items that had perished after 30 years in hibernation. Naturally, Genuine Parts were used throughout to ensure that the vehicle retained its original timewarp character.

It was money well spent, as late suffix Range Rovers are an interesting part of the Range Rover story. These vehicles from the late 1970s were the last hoorah after the first ten years of Range Rover production, an era when the addition of a rear windscreen wiper or a change of seat material constituted a major modification. Of course, there are many differences between a 1971 Suffix A and a 1979 Suffix G Range Rover, but they’re pretty subtle and mostly underneath the surface; the layman would be hard pressed to spot the differences.

After Suffix G however, the later 1980 model year saw a move from sequential chassis numbers to the new internationally-recognised system of VIN numbers. At the same time, investment from the newly formed Land Rover UK gave a new lease of life for the 10-year-old design, paving the way for a relatively rapid series of modifications. The 1980s saw major changes to the original Range Rover, not least the launch of a four-door model, the introduction of the In Vogue and the beginning of the vehicle’s relentless rise upmarket.

The Suffix G was the beginning of this transition, bridging the gap between the Range Rovers of the 1970s and the new generation of the 1980s. In that sense it’s an ideal representation of the two-door Range Rover, encapsulating the first decade of production and all its subtle changes. If you’re looking to get under the skin of the original Range Rover; to see it in its early form but with all the tiny improvements made over ten years of production, then the suffix F and G are good examples of the genre.

With that in mind it’s no surprise that when BOM came up for auction in 2015 there were a few interested parties. After some competitive bidding on the auction floor, this super low-mileage original Range Rover was snapped up by an anonymous bidder for what was then a record price for a Range Rover – it was almost twice its original estimate. But who was this mysterious buyer and where would the vehicle end up? Two years later, all would be revealed: BOM had been purchased by the newly-formed Jaguar Land Rover Classic, with an important job in mind.

At the time, the technicians at Land Rover Classic were secretly starting work on the Range Rover Reborn programme, using a tired 1979 Suffix F Range Rover as the basis for prototype Car Zero. As this base car had been well used and was somewhat less than original, it was important to have an unmolested example to work from as a reference. The whole point of the Reborn programme was to restore tired Series Is and Range Rovers to as-new factory condition, so BOM 437V was the perfect vehicle for the engineers to examine to see how things were done.

For example, when the engineers wanted to remanufacture the gearbox tunnel carpet, BOM showed them how the weave should look, what the colour should be and how it should be shaped. The ribbed floor mats were recast using BOM’s immaculate versions as a model – in short, BOM’s originality guided the engineers with all those little details that are so important to make a restored vehicle as close to factory spec as possible. 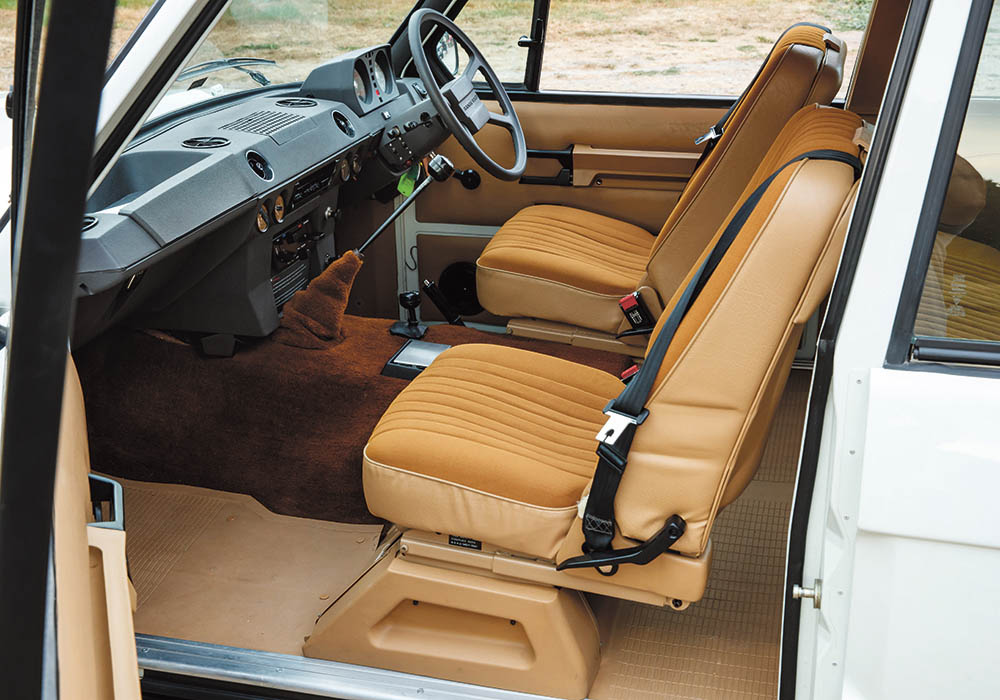 But as well as shaping the build of Range Rover Reborn car zero, BOM had another important job to do at Jaguar Land Rover Classic: serving as the reverse engineering surface model for the production of new body panels.

Part of JLR Classic’s raison d’être is to support the owners of classic Land Rovers and Jaguars in the sourcing of hard-to-find and obsolete parts, and as time progresses this range will increase. During the build of the prototype Range Rover Reborn Car Zero, one of the main areas identified by the team was the need for new body panels for the two-door classic Range Rover. 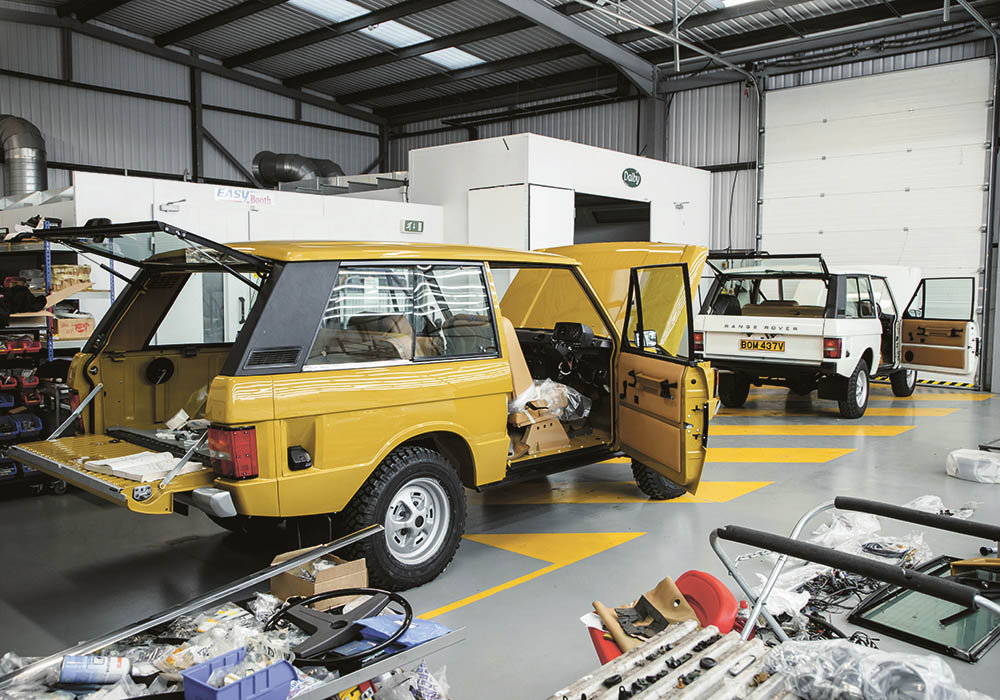 As the original moulds for these panels have long been scrapped, the company has had to start again, this time using the latest CAD/CAM scanning techniques for millimetre precision. Once again, BOM literally stepped up to the plate, with the technicians scanning every inch of the vehicle’s bodywork using the latest 3D laser scanning technology and high-precision probes. This data has now been used to remanufacture Range Rover bonnets, wings and other panels, and more items are on their way. 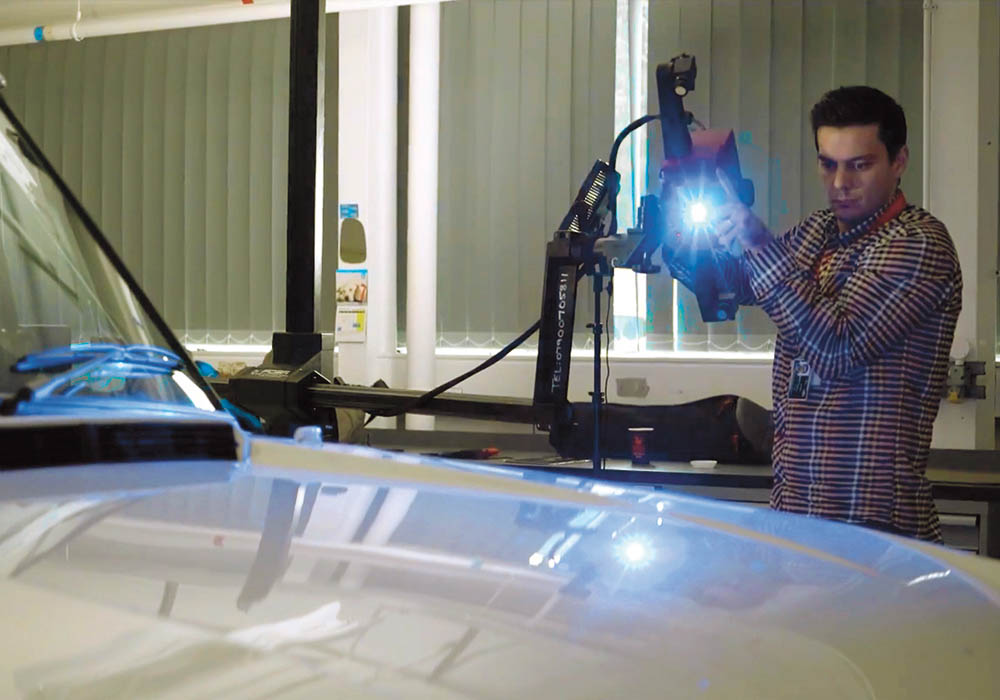 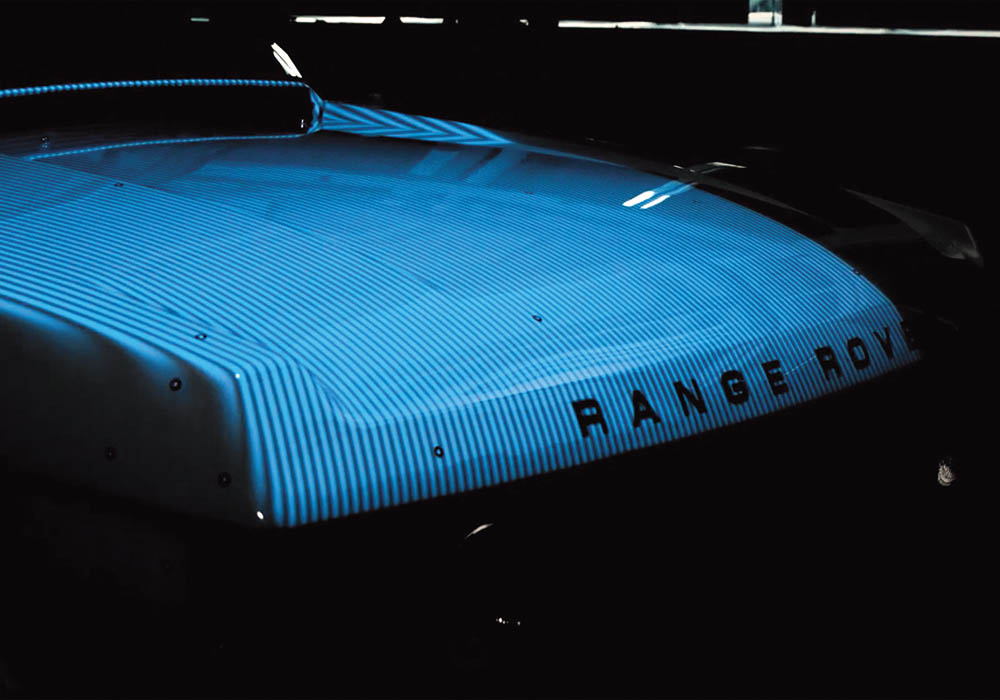 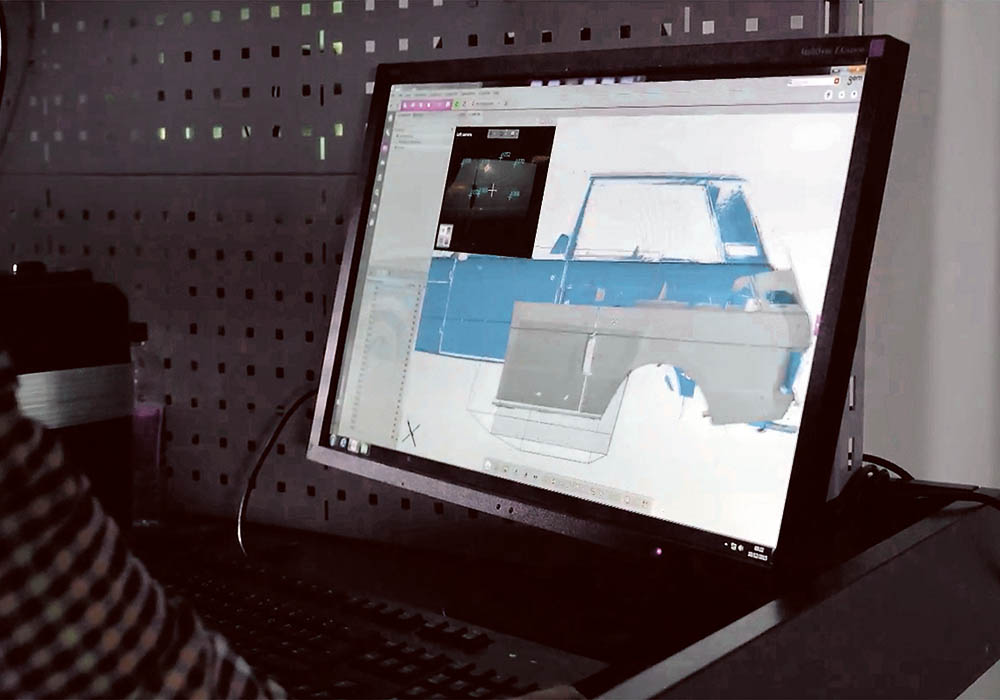 The latest in CAD/CAM scanning techniques

Mission accomplished
All this reference work took place at Jaguar Land Rover Classic between late 2015 and early 2018, and when it wasn’t being probed or scanned, BOM was regularly on display at the company’s Oxford Road showroom. In addition, it also featured on the Jaguar Land Rover Classic stand at the 2016 Paris Rétromobile and German Techno Classica classic car shows to support the launch of Classic parts. It had a brief appearance as an exhibit too at the Range Rover Experience at Solihull in 2017, before being replaced by an original VYB Velar. As if a nod to its future, after this exhibition was set up, the decision was made by the JLR Classic team to sell BOM on to a new owner.

Enter Alexander Walsh, who happened to see BOM in the showroom at Jaguar Land Rover Classic on the day it was due to be advertised for sale. Alex was already a committed Land Rover fan, having already purchased one of the last 2016 Defenders (a rather smart Defender 90 Adventure in grey), and he was totally smitten by BOM on first sight. “After looking around it, I knew BOM had to be mine!” he told me, grinning from ear to ear. 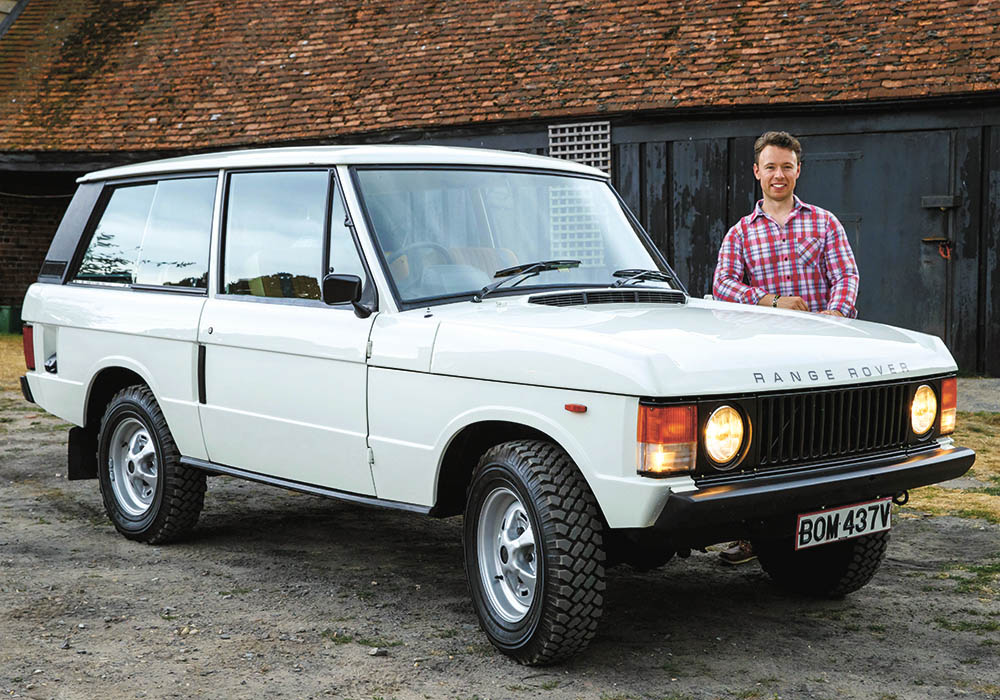 Owner Alexander Walsh also has one of the last Defenders

BOM’s current mileage of 5933 (yes, that’s less than 6000 miles and it is genuine!) makes it an incredibly original and unmolested vehicle, and Alex is understandably proud of his purchase. He has set up its own Instagram page @original rangeroverclassic, and is very aware of his role as custodian of such a unique vehicle. Having said that, he definitely enjoys hustling it around the narrow lanes near his house, and I thoroughly enjoyed going for a ride searching for locations to take the photos you see on these pages.

Although Alex is extremely careful with BOM, he did make the point that if ever it were damaged and needed one of its body panels replacing, then the JLR Classic replacement panel would have used BOM’s original panel as the reference. It couldn’t be a better fit!

One of the greatest pleasures looking around BOM is seeing how pristine everything is, inside and out. The seats look like they’ve never been sat on, the headlining is sag-free, while the rear load area is as scratch-free now as it was 40 years ago when it was made. The super-low-mileage V8 is whisper-quiet, while the normally whiny four-speed LT95 gearbox, moves tightly between ratios precisely as should. There’s none of the traditional stirring-lumpy-custard feel that is synonymous with so many older examples. 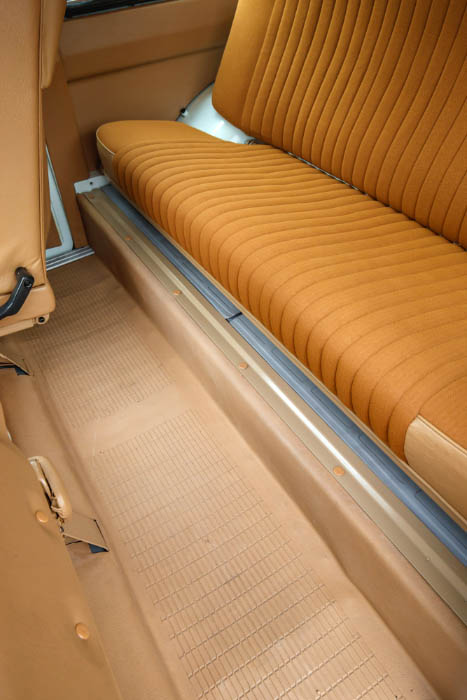 The seats look like they’ve never been sat on 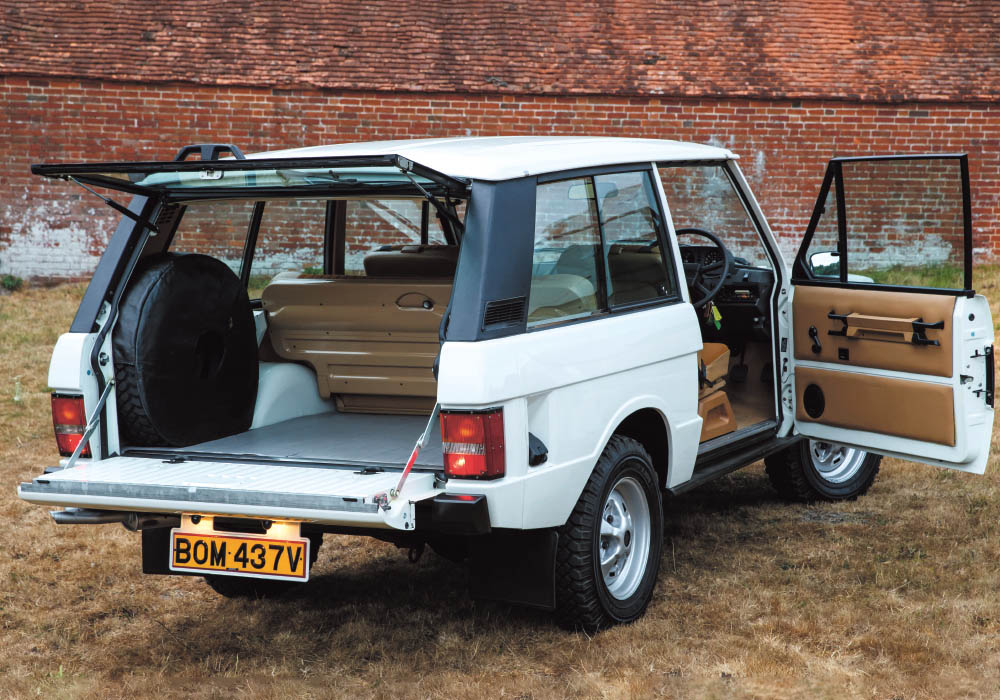 The closer you look, the better BOM is, which is just as well as it has played such an important role in the continued preservation and enjoyment of the original classic Range Rover for generations to come, and let’s face it, that’s good news for all of us.