SYD finally emerges from storage and it's not a pretty sight! : credit: © Gary Pusey

SYD’s restoration finally gets underway after several years in store, but it will be another four years before it is back on the road… 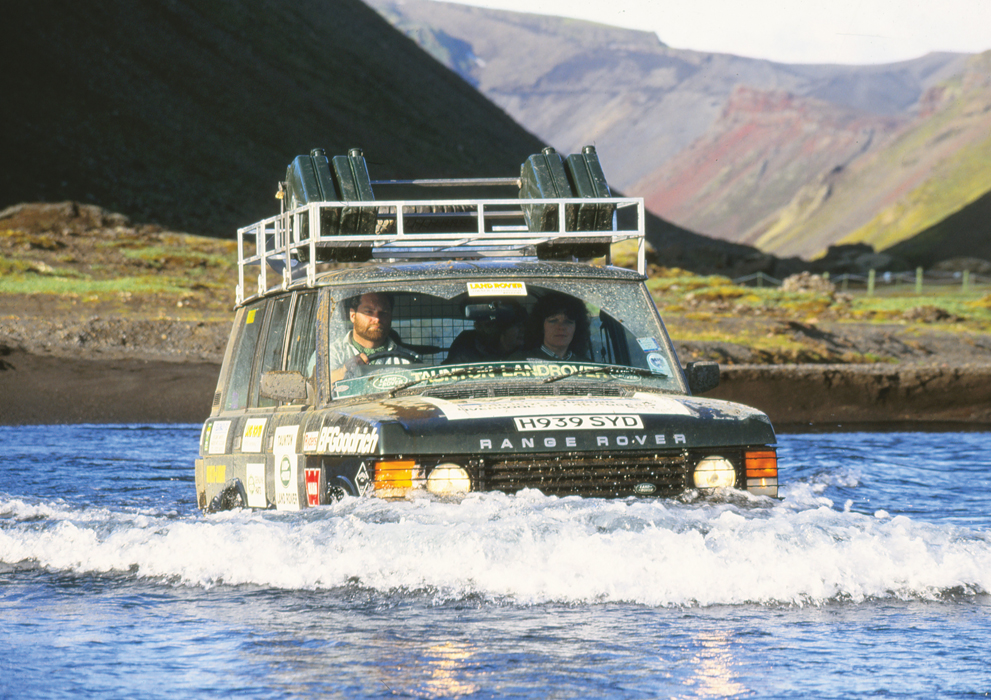 How to trash your Range Rover

This story of my 1990 Range Rover, SYD, starts back in 2004 as I shut the outbuilding door on a battle-scarred and tired old friend that had just suffered one MoT failure too many. I had neither the money nor the time to patch it up yet again, but I knew that SYD was a vehicle that I could not bring myself to scrap. It was a keeper, and one day it would be back on the road.​​​​​​

Four years went by and I don’t think I ventured into the outbuilding more than half a dozen times. It was just too depressing. Better that it was out of sight and out of mind. An ever-thickening layer of dust settled over the car, the tyres leaked their air at different rates and the car took on a distinct list to starboard as the offside front went completely flat and the sidewalls cracked. Rust blossomed across the underside and some of it looked pretty serious. 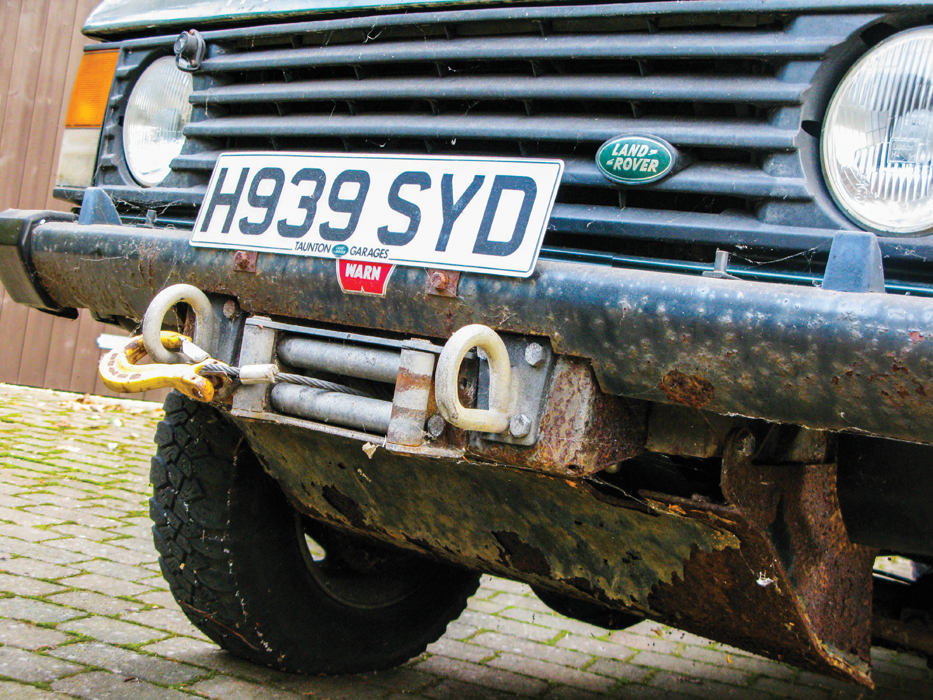 The rot was everywhere

Towards the end of 2008 my wife Fiona told me quite firmly that I needed to fix it or get rid of it. If the truth be known she was almost as attached to SYD as me and she didn’t really want to see the venerable old Range Rover towed away to the crusher, but she was right to nudge me into action.

And that’s how I found myself in the outbuilding on a very cold Christmas Eve morning. I’d made my mind up that I would make a decision before Christmas so that I could go into the New Year with a plan, whether that was a plan to weigh it in for scrap or dedicate myself and my wallet to its resurrection.

I pumped up the tyres, fitted a fully-charged battery and clambered through the cobwebs into that familiar driving seat. Without much hope of anything more than a churning starter motor I put the key in the ignition and turned it. Astonishingly, SYD burst into life immediately, the raucous bark of the V8 reminding me that it was a cracked exhaust manifold that had led me to finally take the car off the road.

Cautiously I put SYD into gear and there was the uncomfortable jolt and clunk from the autobox that I had thought some years ago was a sure sign that the transmission was on its last legs. The brake pads were rusted to the discs, of course, but the V8 would overcome that and it did, although because there was barely a car and a half’s length between the outbuilding and the house I needed to make sure that I didn’t shoot too far forward when the brakes eventually snapped free. Ten minutes later and SYD was safely tucked up in the garage with a dehumidifier for company. I spent an hour getting rid of the cobwebs inside and poking around to make sure there weren’t any obvious signs of little rodents in residence. 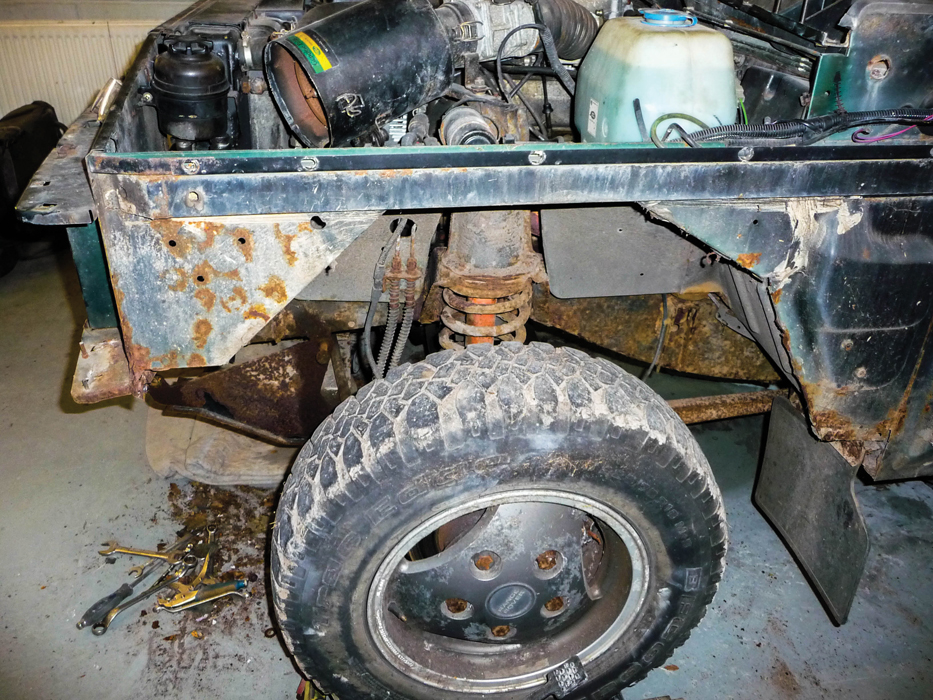 Nowadays, you’ll find any number of companies prepared to undertake a chassis-up restoration on a four-door classic Range Rover, but 12 years ago there was nowhere near as much choice. And because I wanted the original chassis and body shell repaired and the original engine stripped and rebuilt, the list of Land Rover specialists interested in the job dwindled to precisely zero! Even Dunsfold DLR wouldn’t touch it, primarily because of their concerns regarding the sourcing of the long list of genuine parts.

I decided to talk to the company that had worked on some of my other old cars over the years, including my 1970 Range Rover Press Launch vehicle, and Andrew Mitchell of Mitchell Motors Ltd at Chicklade in Wiltshire didn’t bat an eyelid when I told him what I had in mind. He only had two requests: the first was that I would take responsibility for tracking down all the parts that would be needed, and the other was that I should please not ask him for an estimate of the costs! We agreed that Andrew could take as long as he needed for the job, and generally fit it in around his other customer projects.

Andrew collected the Range Rover on January 31, 2009. What followed was a marathon of epic proportions and it would be just two months short of four years before I drove down to Wiltshire to bring SYD home. Needless to say, as promised I never asked Andrew for an estimate of the costs while the project was underway, and I have never actually been able to bring myself to tot up all the invoices. Perhaps it’s better that way! 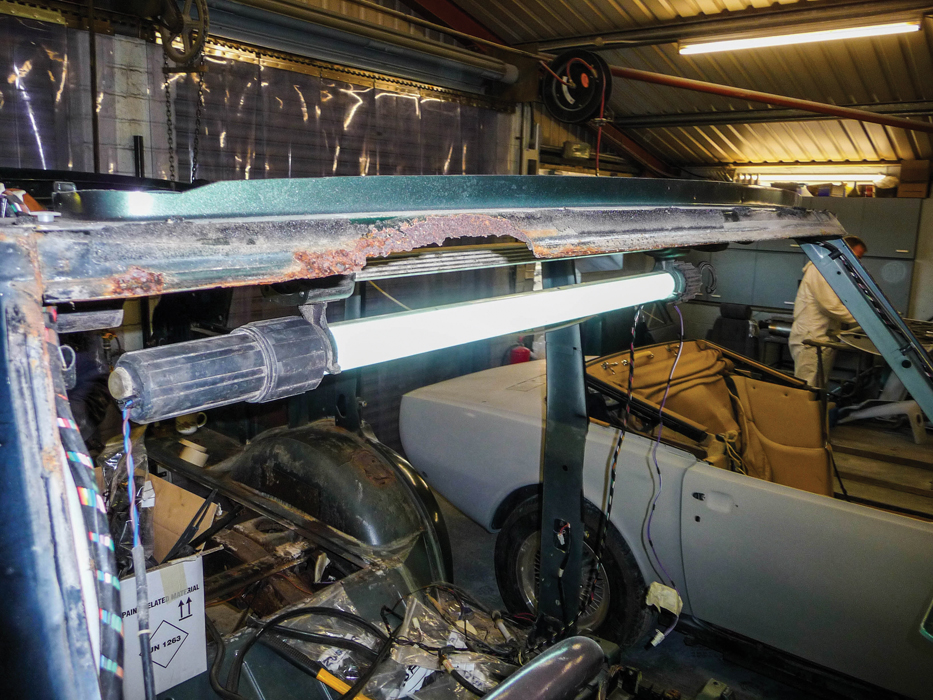 Andrew had set aside what he called ‘the getting down and dirty room’ for SYD. He’d rightly concluded that stripping down a 19-year-old Range Rover that had been driven extensively off-road and been in salt water on a couple of occasions was going to be a messy job. “No offence,” he told me, “but I don’t want any of the tons of crud that’s going to fall out of and off your Range Rover anywhere near the main workshop!” He was right. As SYD was stripped down, a lot of time was spent sweeping up sand, mud, rocks, grit and lots of chassis and body that had decomposed back into its base components.

It would be a huge understatement to say that SYD was in far, far worse shape than I had ever imagined. The state of the decay was eye-popping and up until that point I had laboured under the assumption that my Range Rover, commonly regarded as the best off-road vehicle in the world, was pretty indestructible.

How wrong can you be? The truth of the matter is that it was built to be a disposable consumable rather than a vehicle for life, especially if you did with it what it was designed to do – actually went off-road in it!

The chassis was riddled with rot. There were gaping holes in the rails and Swiss cheese outriggers. The rear crossmember was some way short of what it had been when if left the factory, and the sills were to all intents and purposes non-existent. The body shell had been nibbled away almost everywhere, including the windscreen header rail that looked like it had been chomped by a shark. The rear seat belt anchorages had all but disappeared. 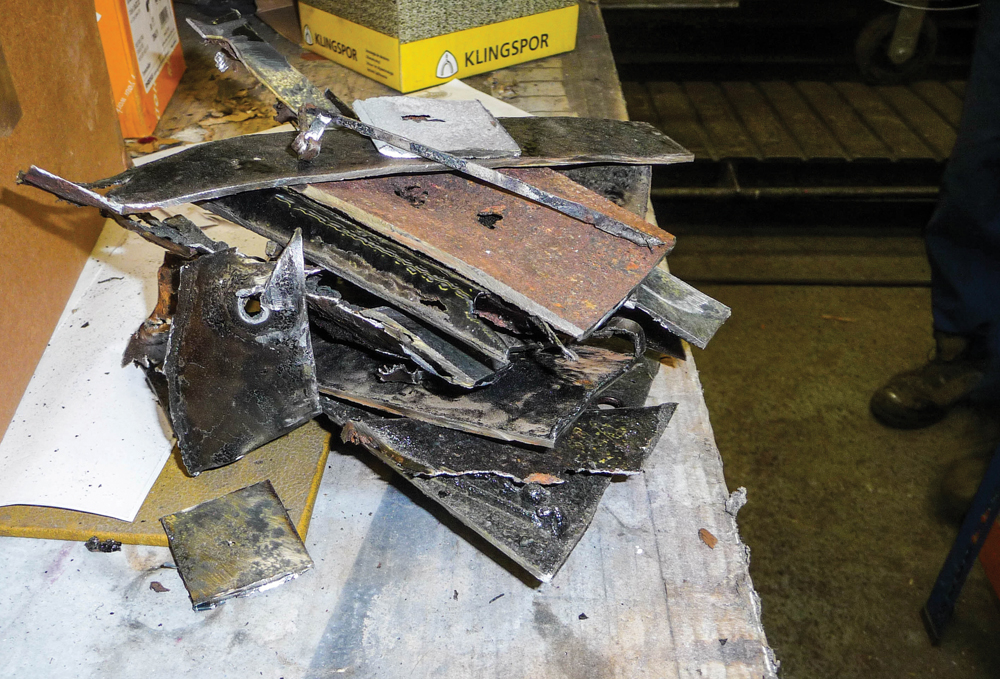 The engine was sent to Turners who had initially said they were only interested in taking it in exchange for an off-the-shelf rebuilt engine, even recommending that I should upgrade to a 4.2-litre. It took a while to get them to understand that what I wanted was my engine rebuilt and returned to me so that it could go back into my vehicle. They couldn’t quite grasp why it meant so much to me to have my original matching numbers engine. Perhaps I was ahead of the pack when it comes to the importance of matching numbers? In the end they agreed, and what came back in due course was my engine, completely rebuilt and beautifully presented. It was actually the first major component in the restoration to be finished.

The autobox was service-exchanged at Ashcrofts for a newly-rebuilt ZF Type 699, as was the Borg Warner transfer box and the front and rear diffs. We had to source replacement front and rear axle cases because both were worn thin and pin holed in various places. Replacement inner wings were sourced together with a selection of various commercially available repair panels, although most of the latter did not impress Andrew’s team so they fabricated their own. 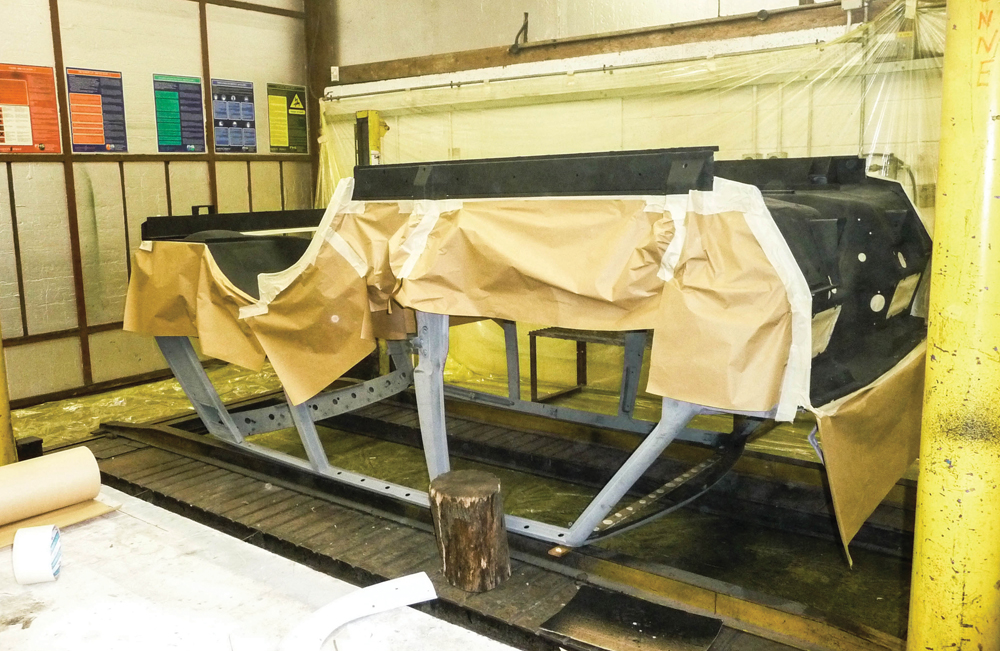 Repairing the original body shell was a huge job​​​​​​

Every single outer body panel bore the scars of many years of off-roading. For one rather daft moment I actually contemplated putting all the original panels back on, but I was saved from that stupid idea when the extent of the electrolytic corrosion became apparent. Finding new panels was remarkably easy in some cases and very difficult in others, with new upper and lower tailgates of the correct type being particularly hard to find. When I realised this, I bought every NOS one I could find, given that I know only too well how quickly they would rot out again. Finding interior trim was also surprisingly difficult and I decided to preserve almost all of the original trim, spending many hours cleaning, repairing and refinishing it.

Over the course of the project I bought parts from literally dozens of suppliers including all the usual players in the UK, but I also connected with parts specialists in Portugal, Germany, Switzerland and the USA for things I just couldn’t find closer to home. In many cases I was told I was buying the last of something from a supplier’s stock, which I found incredible given that SYD was still less than 20 years old.

I made many trips to Mitchell Motors during the restoration, either delivering parts or reviewing progress, and frequently discussing yet another knotty issue that needed to be addressed. Andrew and his team were superlative throughout the process, and I particularly appreciated their unflappability and calm, can-do attitude. 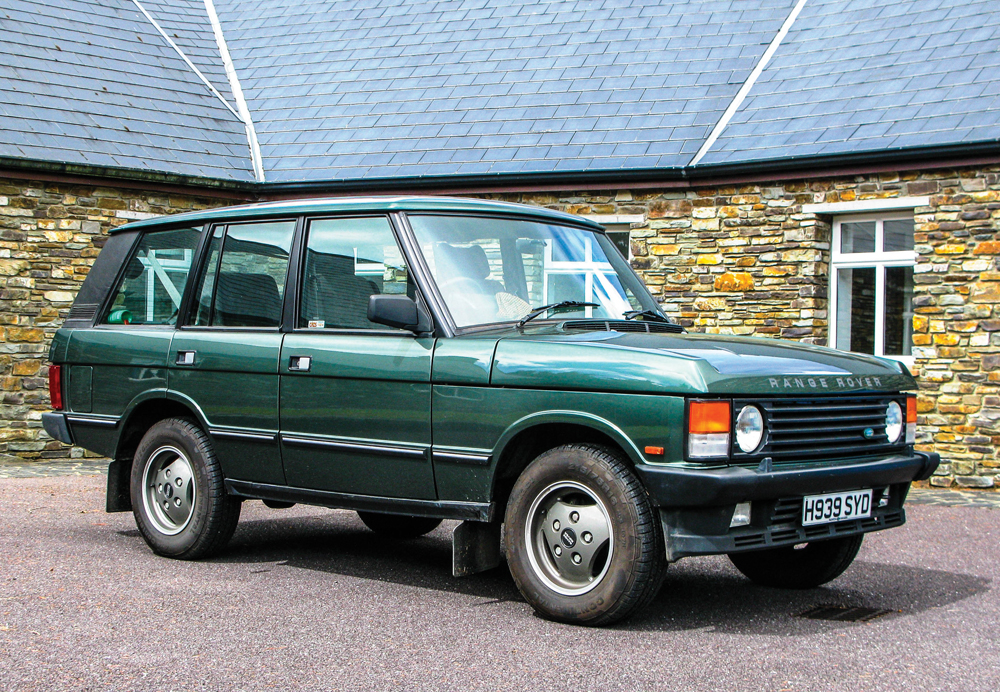 Finally, in November 2012, Philip Bashall drove me down to Chicklade to collect a newly completed and freshly MoT’d SYD for the drive back to Hampshire. The next few months were spent on the usual fettling and snagging, but the only significant issues we had to resolve were a persistent fuel starvation problem and an irritating whine from the reconditioned front diff, both of which were successfully fixed by a combination of DLR and Mitchell Motors. Oh, and a faulty fuel gauge that left me stranded late one night with an empty tank despite the needle telling me it was a quarter full! 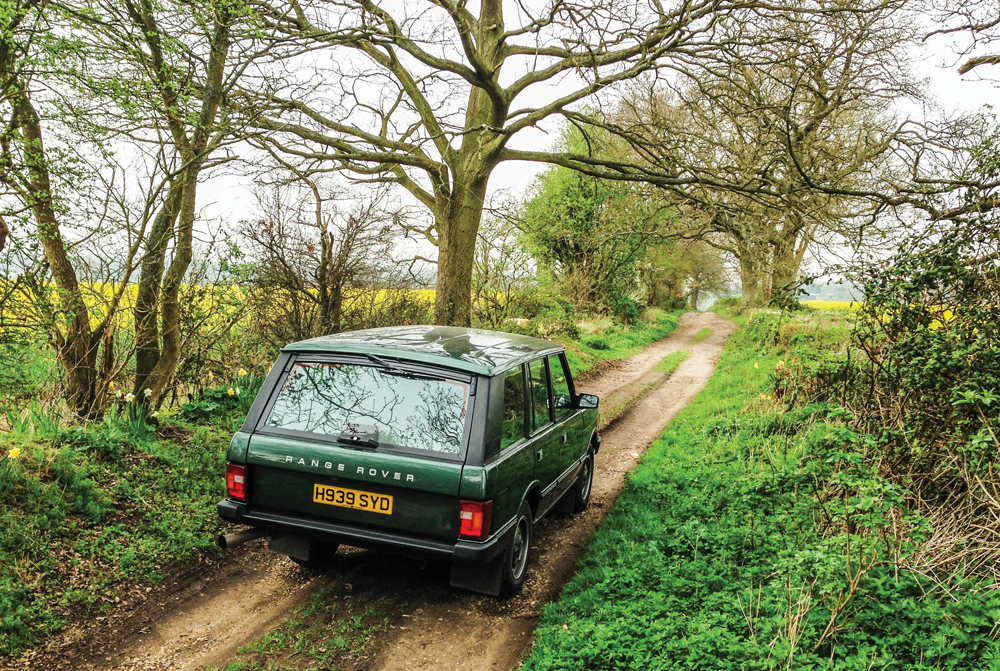 Celebratory drive along the local greenlanes, just like the old days

My original plan had been to pick up where I had left off in December 2004 and continue to use SYD as my daily driver, and this is pretty much what I did for the next couple of years. There were several lengthy journeys to West Cork and the Hebrides, all accomplished without any issues whatsoever. But in 2015 I changed my mind and decided that SYD deserved better, so it was transferred from daily driver to restricted use and special occasions. I love it too much to trash it all over again!